Is Anyone Really Offended by Her F-Word? 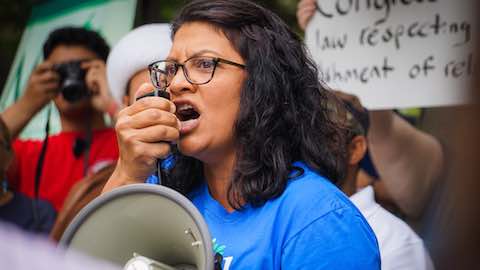 Republicans stood by a president who bragged about assaulting women. Now they have thoughts about propriety. I don't think anyone in Washington is actually offended by Rep. Rashida Tlaib's use of profanity.

If you haven’t heard, Rep. Tlaib, a freshman Democratic representative from Michigan, said of the president, “We’re going to go in there and impeach the motherf—er” to a group of progressive supporters in Detroit.

The remark could offend for two reasons: its intent or its salty language.

The first reason, the intent, is the more substantial of the two. Actually impeaching the president is more consequential for the nation than having a potty mouth. But a single member of Congress cannot impeach the president all by herself.

The leadership of the Democratic Party has always been cautious around the topic of impeaching Trump. Whether they want to or not, or think it would be justified, doesn’t matter much. Previously, they couldn’t do it. Republicans controlled the House, and Republicans would not vote to impeach.

(Remember, the House can impeach, but the Senate then has to convict a president for him or her to actually be removed from office. Bill Clinton was impeached but not convicted and remained president.)

In short, Trump isn’t going anywhere unless the nation becomes aware of such serious crimes that even Republicans in the Senate support his removal. For Democrats, calling for impeachment right now is mostly political, since they can’t actually do it.

Given that the comment was mostly symbolic -- a signal to Tlaib’s supporters that she’s on their side and serious about opposing Trump -- we can take her use of profanity in that light too. (And, as it turns out, the use of the “MF” word has a storied history in Detroit politics, so local reporters say it was fine for her audience.)

But Republicans just can’t stop being offended by it.

Here’s what I don’t believe: Republicans who continued to stand behind the president after he bragged about assaulting women, who have no problems with their colleague Rep. Duncan Hunter’s alleged stealing from his own campaign coffers for personal gain, who even supported Roy Moore after it came to light that as a grown man he romantically pursued and harassed teenage girls, really care about the use of a naughty word.

I think they’re willing to grab any reason to politically damage a Democrat and run with it.

In Washington, hypocrisy doesn’t matter, so long as it works.

Don’t fall for it. Don’t buy their fake outrage. Don’t be distracted.

There are two alternatives, neither of them good. Either they’re generating fake outrage to score cheap political points, or they’re expressing actual outrage because they care more about a single swear word than corruption, crimes, and assaults on women combined.

Whichever it is, they aren’t worth paying attention to.

We send Congress to Washington to do a job and govern our nation. It’s that job that matters, that keeps our country safe and our economy strong, and it’s foolish to be distracted from focusing on that because of a single word, appropriately used.

"Is Anyone Really Offended by Her F-Word?"