Invoking Fake Job Creators to Cut Taxes on the Rich 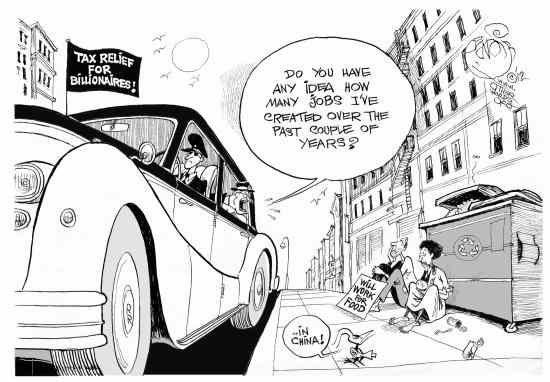 Invoking Fake Job Creators to Cut Taxes on the Rich

Conservatives like House Speaker John Boehner say the government can't raise taxes on millionaires and billionaires because they are "job creators." Instead, House Republicans are once more calling for trillions in more tax cuts for the richest Americans.

But with 24 million people still in need of full-time work and the wealthiest 1 percent capturing a staggering 93 percent of the growth in income in 2010, most customers aren't willing or able to spend more. In these circumstances, we'd be far better off investing in rebuilding the country and paying for it with higher taxes on the rich and the corporations. They aren't putting their money to work, so we should do it for them.

Conservative Republicans also claim that cutting government spending creates jobs, even in the midst of a recession. House Majority Leader Eric Cantor said, "All of our efforts are centered around jobs -- starting with cutting spending and federal regulations -- to grow the economy so that people can get back to work."

But this is just more nonsense. Cuts in government spending at the state level have killed hundreds of thousands of jobs as teachers, cops, and firefighters are laid off and contractors lose their contracts. Those layoffs not only hurt the economy, they slash services we rely on.

Conservatives argue that if we make wrenching cuts in spending, fire civil servants, force seniors to pay more for their health care and students to spend more on tuition, and promise never, never, never to raise taxes, businesses will gain the confidence to invest, despite the resulting government layoffs. But with high unemployment and stagnant incomes, businesses look to increase profits not by adding workers but by cutting costs. Instead of creating jobs, they're firing workers and investing in cheaper labor abroad.

This conservative theology is squandering an extraordinary opportunity to rebuild America. Interest rates are near record lows, the construction industry is flat on its back, and our decrepit infrastructure -- everything from roads to public transit to sewer systems -- must be rebuilt.

We'll never have a better opportunity to borrow money and make the investments we can't avoid -- and put people back to work at the same time. But instead of a major initiative to rebuild the country, the conservative Congress had a hard time even passing a small, short-term extension of a job-friendly transportation bill. No "job creator" would make that choice.