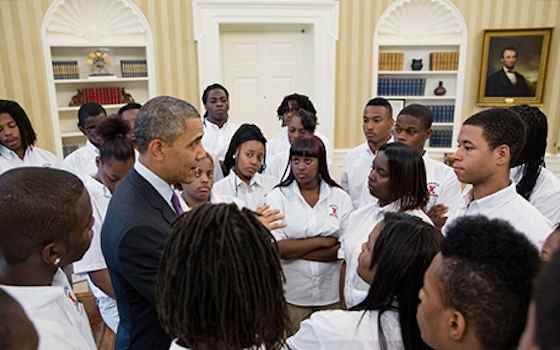 According to the , the program will coordinate government agencies and private foundations to help young men and boys of color. "Of color" basically means blacks and Latinos. In fact, it's pretty obvious the program is aimed at young black men.

This fact has invited some conservative criticism. The Weekly Standard's Terry Eastland notes that the program is likely unconstitutional. Doling out benefits explicitly based on race is generally a no-no, according to the

Even more frowned on: discrimination against women. The program will categorically exclude women and girls. In 1996, when the court (wrongly, in my opinion) ordered the historically single-sex to admit women, Justice Ruth Bader Ginsburg ruled that blanket sex-based discrimination requires an "exceedingly persuasive justification."

For me, My Brother's Keeper meets that bar. The statistics are gloomy and familiar: 1 out of 15 black men is behind bars; 1 out of 3 can expect to be incarcerated at some point in his life.

The simplistic talk about how this is all the result of white racism misses the scope and nature of the problem. The vast majority of interracial violent crime is black on white. But most violent crime is actually intra-racial (i.e., black on black or white on white). Still, blacks are far more likely to die from homicide; half of murder victims are black, which may partly explain why black men in prison have a higher life expectancy than black men out of prison. And this leaves out all of the challenges -- educational, economic, etc. -- facing black men that don't show up in crime statistics.

Roger Clegg, president of the , also thinks the program is unconstitutional because there is no "compelling" government interest here: "It may be that a disproportionate number of blacks and Latinos are at-risk, but many are not, and many whites, Asians and others are. This is just another kind of 'profiling.'"

Yes and no. Obviously there are at-risk youth of all races, but the problems facing young black men are so disproportionate, the difference of degree becomes a difference in kind. Yet, I also think Clegg is obviously right that this is another kind of profiling.

There's an intriguing double standard that tangles up the right and the left. We're told it is outrageous for government to assume that a young black male (in some contexts) is more likely to commit a crime; we're also told that government should target young black men for help because they are more likely to commit crimes. Most liberals hate law enforcement profiling but support -- for want of a better term -- social justice profiling. For conservatives, it's vice versa (though Clegg opposes both kinds of profiling, it's worth noting). Yet the empirical arguments for positive and negative profiling are the same: The plight of young black men is different.

Clegg says that the initiative should be aimed at all at-risk males. Maybe that would be ideal -- on paper. The hitch is that a program that appeals to all young males may not be as effective as one that focuses on young blacks in particular. Relatively benign appeals to racial solidarity and pride by definition don't work on groups of different races.

The point is even more obvious when you consider sex differences. A strong male role model can tell boys to "act like a man" in ways women can't. Sure, a woman can say the words, but she can't be a man. For some boys, particularly ones without fathers at home (the majority of at-risk youths), that's still a huge distinction.

That's why I agree with those liberals who think Obama should have done more sooner for young black men. It may be irrational in a legalistic sense, but in human terms it is utterly obvious that the first black president of the United States -- raised by a single mother no less -- might have special standing with at-risk black youth.

Real life happens outside the neat boundaries of rigid legalisms. It also happens upstream of government. I'm very skeptical this program will do much to fix the deeper problems, but if it causes Obama to focus on them, it's probably worth it.