A Historic Election for Women and Not Just Because of Hillary 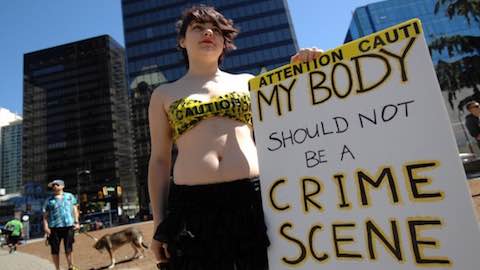 A Historic Election for Women and Not Just Because of Hillary (Photo: Sergei Bachlakov / Shutterstock.com)

Thanks to Donald Trump, many women are speaking up about things they normally keep to themselves.

This election may be revolutionary for women for an unexpected reason.

But I don't think there's anyone left who doubts that a capable woman has the same ability as a capable man to be president. You might not like a specific woman's political leanings -- I'm no fan of Sarah Palin, for example -- but that's different than simply opposing her for being a woman.

No, this election is changing women's role in America for a different reason. To put it plainly, Donald Trump's outrageous statements about women -- which veer regularly into open misogyny -- have sparked a movement of women speaking up about things they normally keep to themselves.

There are lots of reasons people choose not to speak up about being sexual assaulted. Many were voiced on Twitter with the hashtag #WhyWomenDontReport. Some say that it was their boss who assaulted them and they needed the job. Others fear they won't be believed -- or worse, they'll be blamed for what happened to them.

And then there's the simple fact that sexual assault is traumatizing, and we all deal with trauma differently. For some, speaking out is healing. For others, it's retraumatizing.

What would you do if your options were speaking out and being retraumatized by telling your story in front of skeptical cops, lawyers, and a courtroom, perhaps for nothing if your attacker is found innocent? Or, at best, your attacker might get three months in jail, like the Stanford rapist Brock Turner.

Maybe speaking out is worth the emotional cost to yourself if doing so will protect other women, but how many women will be protected if the rapist goes to jail for just three months?

A second Twitter thread, inspired by Trump's loathsome boasts about grabbing unsuspecting women by their genitals, led to 1 million women sharing their own stories of their first assaults.

Some said they could not remember which one was first, because it happened so many times. Others recounted stories from when they were molested as young children. Some said this was the first time they'd ever told anyone what happened.

These were not irresponsible, promiscuous women who were too sex-crazed to take precautions. They were loving, responsible couples who badly wanted children. They were excited to become parents, and they had pregnancies that were going well until a test showed something horribly wrong.

They simply lost a genetic lottery. It could happen to anyone, pro-life or pro-choice.

One of the most wrenching stories came from a Mormon woman who was pregnant with twins. At week 22, when fetuses still cannot survive outside the womb, she found out that one twin was dead, and the second had spina bifida. It would live in pain for a few days and then pass away once born. The pregnancy put her own health at risk if she attempted to carry it to term.

First of all, can you imagine spending another 18 weeks pregnant with your dead and dying children, even if it did not put your own health in danger?

But continuing the pregnancy did endanger her life, and she was already a mom to living children. She was devastated. She checked with her bishop. Even he agreed that ending the pregnancy was the right course in this case.

In countries that ban abortions, women do die in cases like these. A woman died in Ireland in 2012 because she was not allowed to end her pregnancy with a fetus she was miscarrying.

Stories like these are hard to hear, and hard to share. But, thanks to Donald Trump, women have found their voices in the past few months. Let's hope this continues after the election and leads to real change.

Politics: "A Historic Election for Women and Not Just Because of Hillary"