Hillary Clinton and the Neocons 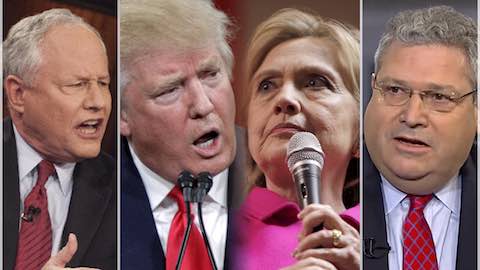 Hillary Clinton and the Neocons

Washington's neocons are generally terrified of Trump's unpredictability and his flirtation with the alt-right. They also support Clinton's more assertive foreign policy, not to mention her closer relationship to Israel. (Photo collage by Salon.com)

Veteran GOP foreign policy hawks are flocking to Hillary Clinton. Is it callow opportunism, or a major realignment?

Much has been made of the swing in political allegiances of neoconservatives in favor of Hillary Clinton.

As a group, Washington’s neocons are generally terrified of Trump's unpredictability and his flirtation with the alt-right. They also support Clinton's more assertive foreign policy (not to mention her closer relationship to Israel). Perhaps, too, after eight long years in the wilderness, they're daydreaming of an appointment or two in a Clinton administration.

A not particularly large or well-defined group, neoconservatives have attracted a disproportionate amount of attention in this election. For the Trump camp, these Republican defectors merely prove that the elite is out to get their candidate, thus reinforcing his outsider credentials (never mind that Trump initially wooed neocons like Kristol). For the left, the neocons are flocking to support a bird of their feather, at least when it comes to foreign policy, which reflects badly on Clinton. The mainstream media, meanwhile, are attracted to the man-bites-dog aspect of the story (news flash: members of the vast right-wing conspiracy support Clinton!).

As we come to the end of the election campaign, which has been more a clash of personalities than of ideologies, the neocon defections offer a much more interesting story line. As the Republican Party potentially coalesces around a more populist center, the neocons are the canary in the coalmine. Their squawking suggests that the American political scene is about to suffer a cataclysm. What will that mean for U.S. foreign policy?

A History of Defection

The neoconservative movement began within the Democratic Party. Henry “Scoop” Jackson, a Democrat from Washington State, carved out a new position in the party with his liberal domestic policies and hardline Cold War stance. He was a strong booster of civil rights and environmental legislation. At the same time, he favored military build-up and a stronger relationship with Israel. He was also dismayed with the Nixon administration's détente with the Soviet Union.

At the end of the Reagan era, their commitment to such policies as regime change in the Middle East, confrontation with Russia, and opposition to multilateral institutions like the United Nations brought them into conflict with realists in the George H.W. Bush administration. So, many of them defected once again to support Bill Clinton. Writes Jim Lobe:

A small but not insignificant number of them, repelled by George H.W. Bush's realpolitik, and more specifically his Middle East policy and pressure on then-Prime Minister Yitzhak Shamir to join the Madrid peace conference after the first Gulf War, deserted the party in 1992 and publicly endorsed Bill Clinton. Richard Schifter, Morris Amitay of the Jewish Institute for National Security Affairs, Angier Biddle Duke, Rita Freedman of the Social Democrats USA, neocon union leaders John Joyce and Al Shanker, Penn Kemble of the Institute for Religion and Democracy, James Woolsey, Marty Peretz of The New Republic, and Joshua Muravchik of the American Enterprise Institute all signed a much-noted ad in The New York Times in August 1992 endorsing Clinton's candidacy. Their hopes of thus being rewarded with top positions in a Clinton administration were crushed.

The flirtation with Clinton's Democratic Party was short-lived. Woolsey, Schifter, and Kemble received appointments in the Clinton administration, but the neocons in general were unhappy with their limited influence, Clinton's (albeit inconsistent) multilateralism, and the administration's reluctance to intervene militarily in Rwanda, Somalia, and Bosnia. Disenchantment turned to anger and then to organizing. In 1997, many of the same people who worked for Scoop Jackson and embraced Ronald Reagan put together the Project for the New American Century in an effort to preserve and expand America's post-Cold War unilateral power.

A handful of votes in Florida in 2000 and the attacks on September 11 the following year combined to give the neocons a second chance at transforming U.S. foreign policy. Dick Cheney became perhaps the most powerful vice president in modern American history, with Scooter Libby as his national security adviser. Donald Rumsfeld became secretary of defense, with Paul Wolfowitz as his deputy and Feith as head of the policy office. Elliott Abrams joined the National Security Council, and so on. Under their guidance, George W. Bush abandoned all pretense of charting a more modest foreign policy and went on a militarist bender.

The foreign policy disasters of the Bush era should have killed the careers of everyone involved. Unfortunately, there are plenty of think tanks and universities that value access over intelligence (or ethics) -- and even the most incompetent and craven administration officials after leaving office retain their contacts (and their arrogance).

Those who worry that the neocons will be rewarded for their third major defection -- to Reagan, to Bill Clinton, and now to Hillary Clinton -- should probably focus elsewhere. After all, the Democratic nominee this year doesn't have to go all the way over to the far right for advice on how to construct a more muscular foreign policy. Plenty of mainstream think tanks -- from the Center for a New American Security on the center-right to the leftish Center for American Progress -- are offering their advice on how to “restore balance” in how the United States relates to the world. Many of these positions -- how to push back against Russia, take a harder line against Iran, and ratchet up pressure on Assad in Syria -- are not very different from neocon talking points.

But the defections do herald a possible sea change in party alignment. And that will influence the trajectory of U.S. foreign policy.

The Republican Party has been hemorrhaging for nearly a decade. The Tea Party dispatched many party centrists -- Jim Leach, Richard Lugar -- who once could achieve a measure of bipartisanship in Congress. The overwhelming whiteness of the party, even before the ascendance of Trump, made it very difficult to recruit African Americans and Latinos in large numbers. And now Trump has driven away many of the professionals who have served in past Republican administrations, including the small clique of neoconservatives.

What remains is enough to win state and local elections in certain areas of the country. But it's not enough to win nationally. Going forward, with the further demographic shift away from white voters, this Republican base will get older and smaller. Moreover, on foreign policy, the Trumpistas are leading the party in a nationalist, apocalyptic direction that challenges the party leadership (in emphasis if not in content).

It's enough to throw dedicated Republicans into despair. Avik Roy, who was an advisor to the presidential campaigns of Marco Rubio, Mitt Romney, and Rick Perry, told This American Life:

One of his Republican compatriots, Rob Long, had this to say on the podcast about how anti-Trump survivors who stick with the party will navigate the post-election landscape:

It’ll be like The Walking Dead, right? We’re going to try to come up with bands of people and walk across the country. And let’s not get ourselves killed or eaten and hook up with people we think are not insane or horrible or in some way murderous.

Coming out of next week's elections, here's my guess of what will happen. The Republican Party will continue to be torn apart by three factions: a dwindling number of moderates like Susan Collins (R-ME), right-wing fiscal conservatives like Paul Ryan (R-WI), and burn-the-house-down Trumpsters like Jeff Sessions (R-AL). Foreign policy won't be much of an issue for the party because it will be shut out of the White House for 12 years running and will focus instead on primarily domestic questions. Perhaps the latter two categories will find a way to repair their breach; perhaps the party will split in two; perhaps Trump supporters will engineer a hostile takeover.

The Democratic Party, meanwhile, may suffer as a result of its success. After all, how can a single party play host to both Bernie Sanders and Robert Kagan? How can the party promote both guns and butter? How can Hillary Clinton preserve Obama's diplomatic successes -- the Iran deal, the Cuba détente, the efforts to contain climate change -- and be more assertive militarily? Whatever unity the party managed during the elections will quickly fall apart when it comes to governing.

At the same time, a new political axis is emerging: internationalists versus insularists, with the former gathering together in the Democratic Party and the latter seeking shelter in a leaky Republican Party. But this categorization conceals the tensions within each project. Internationalists include both fans of the UN and proponents of unilateral U.S. military engagement overseas. Insularists, who have not turned their back on the world quite as thoroughly as isolationists, include both xenophobic nationalists and those who want to spend war dollars at home.

The trick of it for progressives is to somehow steal back the Democratic Party from the aggressive globalists and recapture those Trump voters who are tired of supporting war and wealthy transnational corporations. Or, perhaps in the wake of the Republican Party's collapse, progressives could create a new party that challenges Clinton and the neocons.

One thing is for certain, however. With a highly unpopular president about to take office and one of the major political parties on life support, the current political moment is highly unstable. Something truly remarkable could emerge. Or voters in 2020 might face something even more monstrous than what has haunted this election cycle.

Politics: "Hillary Clinton and the Neocons"