Hillary Clinton's Major Foreign Policy Address Was Anything But 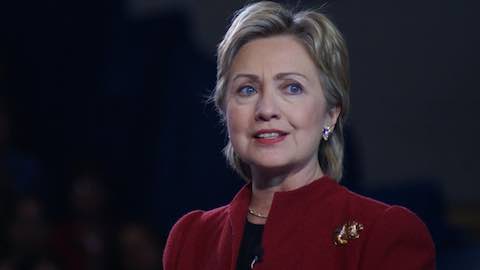 Hillary Clinton's Major Foreign Policy Address Was Anything But

Hillary Clinton is right: Donald Trump would be a disaster on foreign policy. But her refusal to engage with the alternative offered by Sanders says more about her own war-driven approach than anything else.

In the last days before the California primary, where Democratic primary polls showed her neck-and-neck with Bernie Sanders, Hillary Clinton delivered a campaign speech in San Diego. Though her campaign billed it as a “major foreign policy address,” it looked more like a last-ditch attempt to position herself as the Democratic nominee ahead of a potentially embarrassing loss or close finish with Sanders in the nation’s most populous state.

Indeed, most of the address was directed squarely at Donald Trump. It wasn’t a speech on Clinton’s own foreign policy so much as a takedown of the presumptive GOP nominee’s.

Throughout, Clinton contrasted Trump’s often wild and crazy (and not to mention wildly inconsistent) positions with her own claims of having an experienced hand on the tiller (and not to mention on the button). Clinton's overall point was that Trump is “temperamentally unfit to be president,” and that he’d be incompetent and dangerous as commander in chief.

Much of the critique was a rehash of the GOP candidate’s bizarre and often contradictory statements on the subject. After all, Clinton found, it's easy to critique Trump's calls for providing nuclear weapons to Saudi Arabia, South Korea, and other countries. It's a sure laugh-line to mention Trump's claim that climate change is a hoax invented by the Chinese, and a guaranteed applause line (especially in a military town like the carefully chosen San Diego) to remind the audience that Trump said that POWs were not necessarily heroes.

It made sense to remind voters that Trump advocates torture and the assassination of relatives of terror suspects “even though they are war crimes.” It's important to keep front and center Trump's threats to send tens of thousands of U.S. ground troops to fight in Middle East wars (at least when he’s not counseling against interventionism, as he does at other times). And for the target audience of this speech -- apparently independents, centrist and right-wing Democrats, and Republican moderates -- it also made political sense to rail against Trump's threats to “abandon allies” by leaving NATO or (gasp!) being “neutral” on Israel-Palestine.

That was more or less the easy part for the establishment-favored candidate running on her foreign policy expertise. The more difficult part came with Clinton's responses to Trump’s variously vague, extreme, or bigoted positions.

For example, she cited the problems posed by Trump's dissing of U.S. allies from Europe to Asia, whom Trump has accused of “ripping us off.” After all, Clinton reminded her hoped-for supporters, “our allies deliver for us every day.” But it was a pretty weak rejoinder to answer Trump by celebrating how many of our allies “deliver for us” by increasing their military spending, regardless of what that might mean for the populations of those allied countries.

It's not surprising that Clinton also spoke of diplomacy -- her foreign policy cred rests on having been the diplomat-in-chief, after all. She grudgingly acknowledged that diplomacy is sometimes the only way to avoid conflict. But instead of asserting a clear preference for diplomacy over war, she described diplomacy as essentially another weapon in Washington's war arsenal. Recognition of other countries’ sovereignty, of other people's rights, didn’t come up.

She spoke more or less approvingly of the Iran nuclear deal, but bragged that her role was to “lead the effort to impose crippling global sanctions,” not to actually carry out negotiations. She repeated the debunked claim that “Iran was racing toward a nuclear bomb” when the Obama administration took office and then immediately pivoted to a reminder that the U.S. “will act decisively if necessary, including with military action” against the country if the deal falls through -- because, she says, “Israel's security is non-negotiable.”

Crucially, Clinton addressed the ISIS crisis in more detail. She recounted the dangers and inevitable failures that would result from Trump's various and often contradictory positions -- including recognizing Syria as a “free zone for ISIS,” sending “tens of thousands of American ground troops” to the country, and even considering using nuclear weapons against ISIS. She spoke powerfully of how Trump's demonization of Muslims and his threats to exclude Muslims from the United States plays directly into ISIS propaganda. All clear.

But when Clinton described her own “real plan” for dealing with terrorism, it got quite a bit murkier. What would she do? She proposed “intensifying the air campaign and stepping up our support for Arab and Kurdish forces on the ground,” as well as pursuing diplomacy, working with allied intelligence agencies to cut supplies to terrorists, “winning the cyberspace battle,” and “strengthening defenses here at home.”

The thing is, the Obama administration has been doing all those things for almost three years. The U.S. air campaign against ISIS in Ramadi left 80 percent of the city destroyed, with 350,000 people unable to return home -- and she wants to “intensify” the air campaign? She says she also wants to pursue diplomacy “to end Syria's civil war and close Iraq's sectarian divide.” That’s great. But what new diplomatic angle is she proposing? She was the lead diplomat for four years -- what advice or suggestions did she pass on to John Kerry that might indicate she has anything useful to bring to the table? And how can diplomacy be effective when our bombing may be exacerbating the very sectarian divides negotiations are supposed to solve?

Her bragging list of diplomatic accomplishments included nuclear weapons reduction negotiations with Russia (which were badly undermined by an accompanying trillion-dollar plan to “modernize” our own arsenal), the barely useful climate deal in Copenhagen, the 2012 Hamas-Israel ceasefire (which Israel soon violated), the pressure she applied on other countries to join in Washington's sanctions against Iran, and (more laudably, if unevenly) her record of standing up for the rights of women, religious minorities, and LGBT people.

But she didn't mention her failure (matching the failure of the secretaries of state before and after her) to negotiate a just peace in Israel-Palestine based on international law, human rights, and equality for all. Indeed, her earlier promise to embrace Israel’s right-wing prime minister would make salvaging that legacy almost impossible.

Nor did she mention the two issues which shape her foreign policy legacy as a senator and as secretary of state: her vote for George W. Bush's 2003 war in Iraq, and her role in pulling the administration -- including a reluctant president -- into the U.S.-NATO regime change war that devastated Libya and sent a cascade of Libyan weapons into conflict zones across North and Central Africa and the entire Middle East.

It was a notable absence. Most especially because Clinton calls for a new Libya-style “no-fly zone” to be established in Syria -- something she didn't mention in this speech. She was cheerleading for intervention in Libya in 2011 when then-Secretary of Defense Robert Gates, a Republican, challenged her. “A no-fly zone begins with an attack on Libya to destroy the air defenses,” he warned. He was clear that a no-fly zone is an act of war, and wars have consequences. Clinton's plan calls for just that kind of a war against not only the Syrian government, but potentially its military allies Iran and Russia as well. Her “foreign policy speech” didn't spell that one out this time.

As Clinton's speech recognized, a Trump presidency promises an unprepared, dangerous foreign policy accountable to no one but the chief executive himself. As her speech claimed, a Clinton presidency portends a disciplined, ready-on-day-one foreign policy -- but one that also happens to be war-based and accountable to longstanding corporate and military powers in the United States.

The Sanders campaign, unmentioned in the Democratic front-runner's speech, has increasingly offered a different kind of foreign policy -- one rooted in diplomacy over war, global egalitarianism, and accountability to international law and broad movements against war and for justice. Yet in her bid to prematurely claim the Democratic nomination, Clinton failed to mention her more progressive rival even once.

Ultimately, Clinton’s failure to engage with this real, robust alternative -- rather than just the cartoonish one offered by Trump -- may say more about her own war-driven foreign policy than anything else.

Politics: "Hillary Clinton's Major Foreign Policy Address Was Anything But"