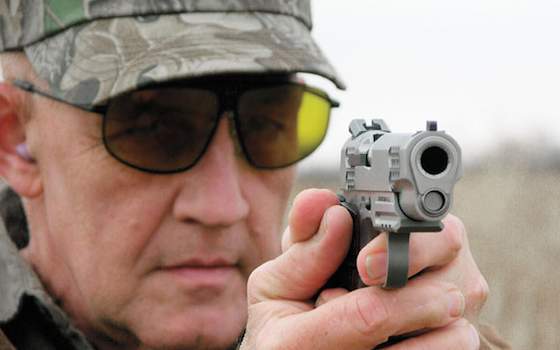 Here is what he said: "...all constitutional rights are regulated, always have been, and need to be."

It would seem to be a self-evident truth. After all, your First Amendment right to freedom of speech is regulated. If you don't believe it, write something libelous about a guy with deep pockets and man-eating lawyers. Your Fourth Amendment right to freedom from unreasonable searches and seizures is regulated and then some. If you don't believe that, pick up your phone and ask the NSA agent tapping your line.

Unfortunately for him, Dick Metcalf, who made the aforementioned observation, was not referring to the First Amendment or the Fourth. No, he was talking about the Second. He's been out of work ever since.

We are indebted to reporter Ravi Somaiya for bringing this story to light. Metcalf, who lives in Barry, Ill., is not a gun hater. To the contrary we are told that he is -- or was, at any rate -- one of the most prominent gun journalists in the country, a self-described "Second Amendment fundamentalist" who, at 67, has devoted most of his adult life to gun rights. He hosted a TV program about guns. Gun makers flew him around the world and sent him their products for review. And he had a regular column in .

In his December column, Metcalf offered a nuanced argument that gun enthusiasts should accept some minor regulation of their Second Amendment rights. Specifically, he said, a requirement that people who wanted to carry concealed weapons undergo 16 hours of training was not "excessive." The way his fellow gun lovers responded to this, you'd have thought he'd argued for U.N. confiscation of every gun, arrow and slingshot in America.

There were death threats. He lost his show. Subscription cancellations poured in. Advertisers demanded he be fired. And he was.

The community he had supported so faithfully had made him a nonperson. See, that community has a simple credo: guns -- no restrictions. And any slightest deviation from that absolutist mantra is grounds for expulsion. If you are only with them 99 percent, you are not with them at all. George Orwell had a word for it: groupthink.

Metcalf's experience is eye-opening, disheartening and worth remembering next time there is a mass shooting -- they come with the regularity of buses -- and you find yourself wondering why we can't all agree on some simple, common-sense ideas to take weapons of mass destruction out of the hands of those who should not have them.

Why not expanded background checks? Why not mandatory gun-safety classes? Why not some system of mental-health reporting?

Think of Metcalf when you hear yourself asking those questions. Then ask yourself how many other Metcalfs must be out there, how many other gun-rights advocates who know in their hearts something has gone haywire when mass shootings are so frequent they barely count as news. And maybe these people would speak up as Metcalf did -- except they know they'd be treated as Metcalf was. So they say nothing. And silence enforces silence.

This is the tragedy of the American gun debate. It offers no space for people of good will to seek common ground. Gun-rights advocates have embraced a "with us or agin us" ethos under which even someone as unimpeachably pro-gun as Dick Metcalf becomes an enemy just because he has a (slightly) different idea.

For their sake and the country's, thoughtful gun owners must find the moral courage to face and fix that sad state of affairs. Until they do, the debate over guns is likely to ricochet from one mass tragedy to the next without ever finding consensus. It takes two sides to reach consensus.

And in America, one side's not even trying.