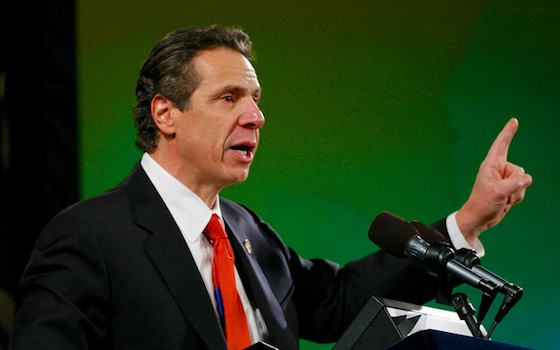 Everyone "knows" it is conservatives who are mean-spirited, intolerant, censors of speech with which they don't agree, anti-gay, anti-black and anti just about everything else, right? We know this because the left keeps telling us so.

Which is why in this era of increasingly corrosive language -- note the overuse of the f-word in the film "The Wolf of Wall Street" -- and acidic political discourse, recent comments by Gov. Andrew Cuomo (D-N.Y.), ought to shock and outrage everyone, regardless of party affiliation or ideology.

After the ran a headline that read, "Gov. Cuomo to Conservatives: Leave NY!" the governor's press office issued a statement claiming his remarks were "distorted" and "taken out of context."

Conservative radio and TV host Sean Hannity said he might take Cuomo up on his directive and probably move to Florida, depriving New York of the considerable taxes he pays.

The attempt to marginalize conservatives smacks of dictatorial behavior clearly evident in President Obama's dealings with his political and ideological opponents. It's as if he's saying to Republicans, "I won. You lost. Get over it!" Whether its taxes, the debt ceiling or spending caps, Obama appears to rule with no need to negotiate, as though the last election, which put Republicans in the majority in the House, never happened.

If either of these statements had been made by a Republican, the reaction from the left would be predictable. There isn't enough space to list the names that Republicans would be called. At a minimum, there would be demands for an apology and at a maximum calls to resign from office.

Winning an election doesn't mean the victor owns the state or country. It means voters have temporarily placed their faith in a person to perform a job that benefits the general welfare.

In his radio interview, Gov. Cuomo praised "moderate" Republicans for helping pass his legislative agenda. Conservatives believe that agenda, and President Obama's, are harmful. Should they not be allowed to say why? Should they not be allowed to argue for a better way? Where are the liberals who are so dedicated to preserving the First Amendment that they defend pornography, offensive language on television and in films and even the burning of the American flag as a price we must pay for all to enjoy freedom of expression? What about conservative speech and expression?

During the Vietnam anti-war protests, conservatives developed a slogan that appeared on some car bumpers: "America: Love it or leave it." Liberals responded that loving America also meant opposing policies of the Johnson and Nixon administrations, which they believed harmed the country. They were right.

Conservatives were wrong then to suggest people who disagreed with them should leave America and Gov. Cuomo is wrong now when he says -- in or out of "context" -- there is no place in New York for conservatives who oppose his social and political positions.