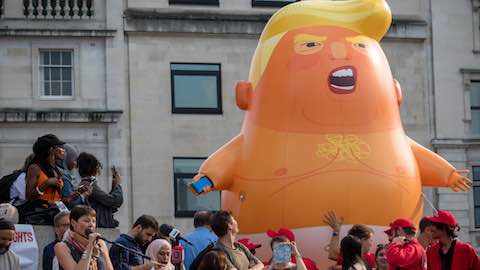 Trumps's 'rule or ruin' strategy -- wall or shutdown! -- is anti-democratic.

News outlets are treating the Trump shutdown as a power struggle between two willful forces, the president and the Democrats -- rather than the president’s disturbing rule-or-ruin strategy. Let’s call it what it is: extortion, an attack on our democracy and the fundamental principle of majority rule.

Under our constitution, the executive branch cannot simply decree that government money will be spent on something. Congress must pass a law authorizing the government to spend the money.

So the only way to build Trump’s wall is to introduce a bill in Congress -- and pass a law -- allocating money for a border wall. Surveys show that most Americans oppose a wall, and Trump doesn’t have the votes in Congress for the $5 billion he wants to start building one (much less the $22 to $70 billion the whole thing could cost.)

So he decided he’ll take his ball and go home. The shutdown will go on for months or years, he now says, until he gets his way.

Except that it’s not his ball. It’s ours.

It’s the government of the American people that he’s shuttering, not the plaything of the president. Our government does important things for us like enforcing clean air and water rules, making sure food and drugs are safe, supporting schools, protecting airports -- and, yes, funding the Department of Homeland Security itself.

How long do we expect government workers to work for free? Will our airports have to shut down, our national parks be closed, our Social Security checks stop coming until the president gets his way?

One way to decide if something is reasonable is to ask how we’d feel if the shoe were on the other foot. What if Democrats tried government by extortion?

Many Democrats believe that since abortion is a constitutional right, Medicaid shouldn’t be barred, as it now is, from paying for abortions for women in poverty. But Democrats don’t have the votes to repeal the current law. What if they shut down the entire government unless they got their way?

Similarly, progressives say (not incorrectly) that we need to act against climate change. Global warming is already wreaking havoc: more violent hurricanes, runaway fires in the West, flooding along the coasts, and other disasters.

But since GOP climate change deniers control the Senate, Democrats can’t pass laws to encourage a transition to clean energy. Should Democrats simply refuse to pass any bill at all to fund the government unless they get their way?

However worthy the cause, the answer is no. When you insist on rule or ruin, the result is likely to be ruin for the rest of us.

If the proponents of every program that had support in Congress -- but not enough to be enacted -- decided it was better to crash the government than accept a defeat for the time being, that would be the end of our democracy. It would mean that all of the government programs that do enjoy majority support would, in effect, be vetoed. Vetoed unless a program that the majority doesn’t support was enacted.

Flying the government into a mountainside isn’t principled behavior. It’s a disastrous attack on democracy.

Before the Nazis came to power in Germany in 1933, Germany’s democratic republic had broken down. It broke down because the rule-or-ruin strategies of the parties at the extremes, the fascists and the communists, had prevented the government from governing. Today’s effort to govern by extortion raises the same peril.