How to Get the Federal Government Out of Washington 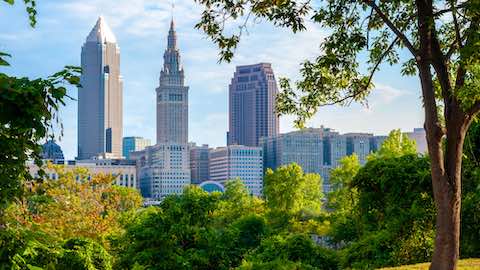 Relocating federal agencies to the heartland would create jobs, revitalize cities, and put government more in touch with the people.

Americans of all political stripes distrust the federal government.

For years, the name of the nation’s capital has been used as shorthand for federal overreach and bloat. For most Americans, Washington, D.C. is hundreds of miles away -- and a million ways disconnected -- from them.

The Washington area is home to hundreds of thousands of federal jobs, and many unpopular agencies. But agencies that are more spread out, like the Postal Service, are significantly more popular.

So here’s a simple idea: Move more of the federal government to the rest of the country.

Studies show that once you get to know people different from you, your prejudice towards them drops. Could that same approach also bridge the deep disconnect between Americans and their national government?

One way to sweeten the pot would be the promise of tens of thousands of jobs to areas that need them.

A geographically diverse federal government would be bolstered by the Green New Deal program championed by progressives like Alexandria Ocasio-Cortez.

Bringing back past agencies, like the Depression-era Works Progress Administration, to help build green infrastructure would help transition this country off fossil fuels and into a sustainable future. It would guarantee jobs, maybe good union jobs, for countless workers.

A new Works Progress Agency could establish offices in places like Milwaukee, where it could build a long-discussed high-speed rail line connecting the cities of the Midwest. Or in Phoenix, where it could construct more solar power plants in the desert. It could set up in places like Jackson, Mississippi, helping to build sustainable co-op farms, or on the Gulf Coast, to fight climate change.

Similarly, a single-payer, Medicare for All health service would also need to have offices in communities. It would create health care jobs in places often abandoned by providers, boosting economies and bringing affordable care to millions.

There's another benefit to all this: the revitalization of our heartland cities. Midwestern cities like Detroit, Cleveland, and Milwaukee are full of classical architecture and cultural amenities, but have lost hundreds of thousands of jobs from the erosion of manufacturing. New federal jobs could reverse decades of decline in these grand cities.

The National Weather Service could move to New Orleans or another area impacted by the climate change they study. The U.S. Geological Survey could move out to Sacramento, which knows something about earthquakes. Agencies that deal with farming and rural development could set up in Farm Belt areas like Kansas City, where they'd be more attuned to the people they serve.

Spreading out the federal government would help rebuild the trust that’s eroded in recent years and provide jobs that are unionized, well-paying, and accessible to people often excluded from the broader economy.

Decentralizing government is popular across the political spectrum, and the federal government is bogged down by its centralization in D.C. Why not put it more in line with its original mission -- to be of the people, by the people -- and bring it to the people that need it most?

"Get the Federal Government Out of Washington"