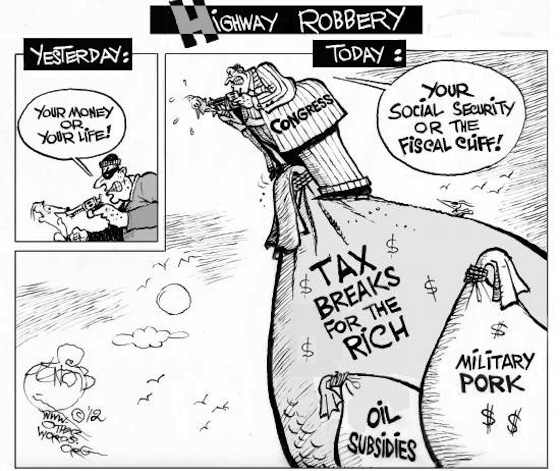 With a little creativity, we can easily balance the budget without cutting Social Security

Talk of the so-called "fiscal cliff" has grown from a murmur to a roar this holiday season.

The White House and Republican lawmakers are furiously negotiating a "grand bargain" to avert a rash of spending cuts and tax hikes that might scuttle the recovery. Unfortunately, their deal may include unnecessary and arbitrary Social Security and Medicare cuts.

Fiscal policy, like foreign policy, isn't everyone's favorite subject. But all Americans need to realize that those vital earned-benefit programs didn't create this huge deficit. Here's what did cause it: Washington cut taxes on the rich while waging lengthy wars of choice and the Great Recession depressed tax revenue when the housing bubble burst.

Raising the retirement age to balance the budget would be as wrongheaded as invading a Middle Eastern country run by a brutal leader to root out caches of weapons of mass destruction that -- it turns out -- don't even exist. Wait. Doesn't that sound familiar?

Sure, those looming cuts could inflict serious damage. But the biggest danger is that the White House and Congress will rush a budget deal that would rip our already threadbare safety net and still fail to keep the fragile recovery on track.

We're not a poor country. We're just suffering from a poverty of imagination and courage. With too few options on the table, it just looks like some terrible choices are inevitable.

At a time when fewer and fewer senior citizens can afford to stop working in their golden years and pensions are becoming an endangered species, why is Social Security even on the table? How did it become the centerpiece?

This "fiscal cliff" hysteria could easily trigger a grand fiscal swindle. But it doesn't have to -- because we're not broke.

My organization, the Institute for Policy Studies, has identified 20 creative tax and spending ideas that would balance the budget. This proposal would empower Uncle Sam to continue and even expand programs that help people in need and rebuild our infrastructure.

Our list of 20 proposed revenue-raisers and spending cuts isn't exhaustive but it does demonstrate that there are commonsense ways to put our country on a more sustainable path.

These ideas would narrow the federal budget deficit by $881 billion a year, nearly eliminating it altogether. More than half of this savings would come from fairly taxing Wall Street, corporations, and the rich. The rest would come from right-sizing the Pentagon, taxing pollution, ending climate-killing subsidies for fossil fuels and other forms of dirty energy, and improving our land-use policies.

Our proposal would leave plenty of resources for the nation's pressing human and environmental needs, and stave off those looming across-the-board cuts.

There are sensible ways to achieve a more sustainable budget without hurting the most vulnerable among us. But every saved cent shouldn't pay for deficit reduction. Whether we leap off a cliff or just trip over a curb in 2013, the federal government should direct some budget savings toward long-neglected priorities.

After all, tens of millions of us will remain uninsured and under-insured after the Affordable Care Act's full implementation. The foreclosed-upon need more help, not less. As everyone whose home got washed away during Superstorm Sandy learned first-hand, adapting to the extreme weather that's become our new normal and doing what we can to slow climate change will require major public investment.

Instead of freaking out about a theoretical cliff, we need to do something about the real challenges that could wreck our future.