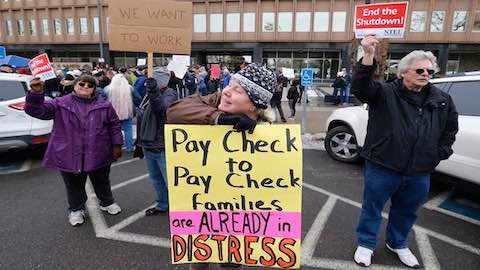 Federal workers begin to feel pain of shutdown as 800,000 lose their paychecks. Because many Americans live paycheck to paycheck, the loss of even one can be a big financial blow for a family.

President Donald Trump wants US$5.7 billion to fund a border wall to keep out undocumented immigrants and "criminals." Democrats in Congress say the wall is a waste of money that wouldn't solve any of America's actual immigration programs.

Caught between the two sides are about 800,000 federal workers whose agencies are affected by the partial government shutdown. And although it started about three weeks ago, Jan. 11 marks a significant milestone: It's the first time affected workers won't get their paychecks.

As a researcher who studies people's wealth, I understand that while the loss of a single paycheck may not seem like much, for many American families it can be devastating financially.

Most of them work for departments such as Defense, Education and Labor that remain open because Congress passed spending bills fully funding what they do. About a quarter of the federal government -- including the Departments of Homeland Security, Justice and Agriculture -- has no new funding, leaving 800,000 workers in the lurch.

About 380,000 have been furloughed without pay, while 420,000 are deemed essential and have to report for work. However, these essential workers are not being paid either.

And on Jan. 11, they'll feel the impact of that lost pay.

So what's the big deal if these workers don't get a single paycheck?

The problem is many Americans both in and out of government live paycheck to paycheck. Estimates range anywhere from one-third to more than three-quarters make ends meet every two weeks.

No matter which figure is right, it means that many American families cannot financially survive for long without earning money. And a significant share don't have enough money to absorb even a $1,000 emergency expense -- let alone a prolonged period of time without a paycheck.

There's some good news for government workers who have been furloughed. They are eligible for unemployment insurance, a federally mandated, state-run program that protects workers' incomes when they lose their job through no fault of their own.

Workers who sign up for unemployment insurance can receive a portion of their wages for up to half a year. For example, Virginia tells federal workers they will get anywhere from a minimum of $60 to a maximum of $378 a week if they ask for benefits, depending on their past salary. Washington, D.C., offers up to $425, all taxable. But even the maximum is barely a quarter of the weekly equivalent of the average federal salary of $84,000 per year.

Essential government employees inspecting bags at airports or guarding the president, however, have a much tougher problem. They are not eligible for unemployment insurance, which means their only recourse is drawing on their savings -- if they have enough -- or taking out a loan.

Going without a paycheck for a few weeks is hard enough. If the shutdown lasts months or years -- as Trump has threatened -- the situation could get very dire for the average government worker.

And while Congress is required to eventually pay those who worked during the shutdown, there's no guarantee that it will pay workers that it forcibly furloughed.

While it's hard to know when this shutdown might end, the good news is that Congress tends to give all affected workers back pay, regardless of whether they worked during the impasse. That's what happened in 2013, when lawmakers unanimously approved paying everyone back.

The bad news is that 800,000 workers are caught in the middle of a political dispute over a wall. And in simple terms, the government is taking a no-interest loan from these workers as they seek (or not) to resolve it.

Resolved or not, I predict two other unfortunate consequences: More talented workers will quit the federal bureaucracy and more will avoid taking federal government jobs in the future.