Americans Think Trump Tweets Too Much 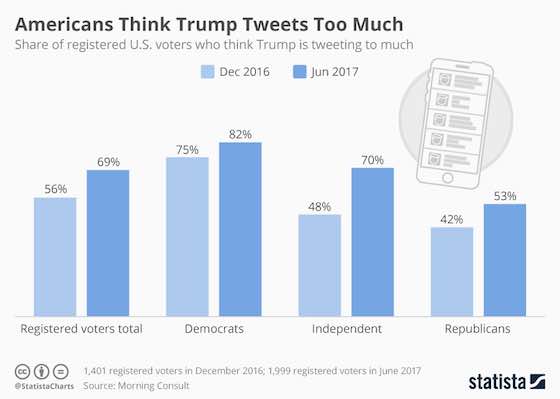 Americans Think Trump Tweets Too Much

Even republican voters are increasingly critical of President Trump's tweet barrage. This chart shows the share of registered U.S. voters who think Trump is tweeting to much.

United States President Donald Trump is exceptional in his use of Twitter.

There doesn't seem to be much he wouldn't comment on or announce on this particular social media channel. However, not everybody seems to be as enthusiastic about his tweeting habits as he himself seems to be.

Survey data by Morning Consult shows that now even Republican leaning voters seem to be getting fed up with the constant barrage of tweets. While in December 2016, 43 percent of Republicans thought Trump should cool it on Twitter, now more than half, 53 percent, think he tweets too much.

Counting in all registered voters, most likely to resemble the general public, the figure has jumped 13 points from 56 percent in December 2016 to 69 percent in June 2017, according to the survey. Unsurprisingly, the Democratic respondents are most critical, with 82 percent disapproving of Trump's flow of tweets.