The Complex Case of Complexity

by Alvin and Heidi Toffler 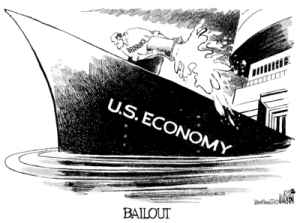 In an important recent speech, months after the current financial crisis began, the chairman of the U.S. Federal Reserve Board, Ben Bernanke, placed partial blame for the catastrophe on "the sharp increase in the complexity of the financial products offered to consumers."

We should be thankful that so important an economist has finally called public attention to the role played by rising economic complexity.

Unfortunately, Ben Bernanke's description of the problem comes late and underestimates its importance.

First, the problem of complexity -- indeed, super-complexity -- in the economy is not limited to financial products offered to consumers. And it isn't just consumers who need help.

Rating agencies that evaluate stocks for investors did not keep up with the rising complication. Nor did many top-level Wall Street peddlers, who sold investment instruments that they themselves could not understand.

To appreciate what is happening today, it helps to remember that as far back as the 1980s, two teams of economists fought a public battle over the nature and role of complexity.

Conventional economic theorists compared the behavior of economies to that of the universe or parts of it, which, in turn, they pictured as essentially closed, linear and equilibrial.

By contrast, in light of new scientific theories, other economists arose who challenged the emphasis on stability and stasis, and, following the work of physicists like the Nobel prize-winner Ilya Prigogine, pictured economies as anything but equilibrial.

They saw them as not merely complex but moving toward higher and higher levels of complexity, like their concept of the universe itself.

But today's economists don't need to look as far as the universe to recognize that, in countries advancing beyond the smokestack era, not only are economies increasingly complex, so, too, are social, political and cultural relationships -- all of which radically and inescapably influence the way economies work.

Nor has rising complexity in advancing countries, and the U.S. in particular, been any great secret -- as a few quotations tell us.

Item One: "A runaway regulatory machine generates an increasingly impenetrable mesh of rules -- 45,000 pages of complex new regulations a year." (1980)

Item Two: "As we leave the industrial era behind, we are becoming a more diverse society. . . . This new diversity brings with it more complexity, which, in turn, means that businesses need more and more data, information and know-how to function." (1990)

Item Three: "Has anyone noticed how complicated sports have become? . . . Today we see more and more teams, more leagues, more rules and many multifaceted relations between teams and leagues. Moreover, the sports world finds itself entangled in everything from drug laws, television, politics, labor unions and gender conflict to urban planning and intellectual property issues." (2006)

Item Four: "Complexorama. Each of history's three great wealth systems -- agrarian, industrial and knowledge-based -- differs in levels of complexity. Today we are experiencing a historic, system-wide leap toward greater economic and social complexity." (2006)

Item Five: "Complexity at the personal level is immensely amplified at the level of business, finance, the economy and society . . . Bill Gates . . . speaks of 'astronomically rising complexity.' In Germany, the Federal Financial Supervisory Board speaks of the "growing complexity of banking." (2006)

These quotes come from pages of the books we ourselves have written. But they could just as easily been plucked from endless other sources.

If economists today are still discovering complexity, it might be better to turn the economy over to our pet German Shepard. She knows where the dog food is kept.

Their earlier works include "Future Shock