Trump Was Born on Third Base 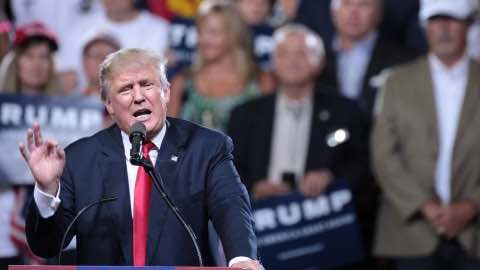 Trump Was Born on Third Base (Photo: DonkeyHotey / Flickr)

The stories politicians tell about their successes matter -- including the ones they omit.

Donald Trump was born on third base, but claims he hit a triple.

Throughout history, we've had many “born on third base” presidential candidates, including Mitt Romney, George W. Bush and now Trump. These politicians trumpet their business acumen, but reveal little about their privileged head starts.

This twisted narrative is dangerously misleading.

Trump campaigns on his business prowess, but understates the tremendous advantage of inheriting his father's real estate empire, with its existing assets and financial and political connections. Even without that million-dollar loan, Trump was set-up for success.

Similarly, George W. Bush built his oil business and baseball team with networks of investors who were friends of the Bush dynasty. Yet he attributed his success to “results and performance.”

And in 2012 presidential candidate Romney told supporters that he’d “inherited nothing,” saying “Everything that Ann and I have we earned the old-fashioned way, and that's by hard work.” But this understates Romney's extraordinary privileges.

I attended the same private prep school as Mitt Romney. At the time, his father was the governor of Michigan, after being CEO of American Motors. Ann Romney later explained that she and her husband weathered lean years by selling off stock inherited from Mitt's father.

The stories that politicians tell us about their wealth and success have enormous implications for the kind of America they envision.

And so do their omissions.

Those who are born into advantage, but pretend their status is the result of the sweat of their own brow, typically don't support policies that expand social opportunity.

Trump, Romney, and Bush, for example, all support the abolition of the estate tax for the superwealthy and deep cuts in investments that foster opportunity, such as college aid and homeownership.

In contrast, we’ve had the Kennedys and Roosevelts, who don't deny their advantaged family heritage. I once heard Senator Ted Kennedy joke that, “his family made its money the old-fashioned way, he inherited it.”

If a politician readily admits they didn't do it alone -- that their status is partly a result of family advantage, public investments, inherited wealth, social connections, and direct and indirect subsidies -- they're more likely advocates of maintaining investments in opportunity and vocal champions of those excluded from prosperity.

As I write in my new book, Born on Third Base, there’s nothing wrong with being born at the top of the economic pyramid. Millions of us grow up in families with all kinds of privilege, such as graduating college without debt, and enjoying countless forms of family support including zero-interest loans, cars, family introductions, and help in emergencies.

But what if your parents actually need you to provide financial support for them, not the other way around? What if you were excluded from a federal mortgage program based on your race, as millions of families were?

We who are born on third base risk believing the illusion that the wind at our back is our own locomotion. We wonder, “Why can't others do what I did?” without noticing the headwinds most people face.

We downplay the advantages of being born wealthy and white, ignoring how the legacy of racism shows up in today's homeownership rates and savings accounts, regardless of how hard someone works.

Today, family wealth is now a decisive factor in college access and success.

People graduating without college debt, having completed unpaid internships, have a huge head start over their less affluent peers. Instead of education being the great leveler, it actually worsens existing inequalities of opportunity.

Malcolm Gladwell writes, “We cling to the idea that success is a simple function of individual merit and that the world that we grow up in and the rules we choose to write as a society don't matter at all.”

But the rules, like spending priorities and tax policies, do matter. And the stories we tell about our success also matter, including those we omit.

We are all better off in a society that creates real opportunities for everyone, not just those born into fortunate circumstances.

Chuck Collins co-edits Inequality.org at the Institute for Policy Studies and is author of the new book, "Born on Third Base: A One Percenter Makes the Case for Tackling Inequality, Bringing Wealth Home, and Committing to the Common Good". Distributed by OtherWords.org.

Politics: "Trump Was Born on Third Base"