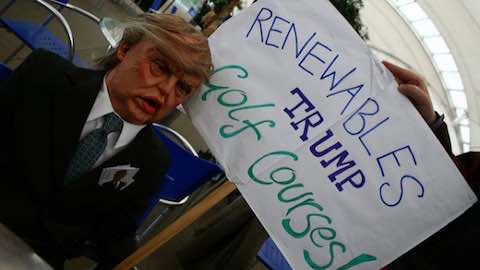 The presumptive GOP nominee says climate change is a hoax, except when it threatens his luxury golf course.

Newsflash: Donald Trump isn't as retrograde on climate change as we thought. It turns out he's well aware of the dangers of global warming -- at least to his golf courses.

The Republican presidential hopeful is so concerned, in fact, that he's petitioned the Irish government to let him build a seawall to secure his luxury golf course and hotel on the County Clare seaside.

According to an application filed by one of Trump’s companies, to "do nothing" as the ocean continues to eat away at the waterfront greens would pose a "real and immediate risk" to Trump's beachfront property. And it explicitly cites rising global temperatures as the root of those threats.

As any good neighbor would, the real estate magnate also sounded the alarm to local residents. A brochure circulated by his company to surrounding towns makes the case for coastal protection, pointing out that more frequent storms brought on by global warming will increase the rate at which beaches disappear in the coming decades.

Climate change, Trump seems to be saying, is an existential threat to his Irish golf course. But what does he say about it here in the United States? It’s a Chinese-orchestrated "hoax.” It’s "BS." It’s "pseudo-science."

It doesn’t stop there. Trump’s also picked a pro-oil and coal climate denier as a top energy adviser. And he's promised to trash domestic rules and international agreements that cut carbon pollution.

Apparently the billionaire-turned-politician is happy to appeal for government support to protect his overseas assets. But he’s not on board with public policies meant to keep his fellow Americans and their homes safe.

And the threat to his fellow Americans is very real.

A recent study by the humanitarian group Christian Aid calculated that 34 million people in the United States -- that's 10 percent of us -- will be living in towns and cities exposed to coastal flooding by 2030. The eastern seaboard is especially at risk.

Miami ranks eighth for world cities whose residents face being washed out. It's forecast to shoulder the highest financial costs from rising oceans of anywhere on earth, with $3.5 trillion in exposed assets over the next 50 years alone. New York City, Trump’s hometown, comes in a close third at $2.1 trillion in expected losses.

But when the storms come, it won’t be people like Trump who pay the biggest price.

After extreme coastal storms, ordinary families face formidable obstacles to accessing insurance payouts to cover the costs of rebuilding their lives. Billionaires like Donald Trump, on the other hand, can call a private jet to whisk them off to their second (or third) home.

You can bet that if Trump knows climate change is bad for business at his golf course, he knows it’s bad for business, period -- small and large, in Ireland or here in the United States. But he’s happy to let the sea swallow our homes, as long as his own property gets a wall.

That double standard should give voters across the political spectrum pause. It's not about blue or red. It's about a brash billionaire thinking his interests are more important than everyone else's.