22 People, $43 Million: The People Doling Out the Dough for Pro-Clinton Super PACs 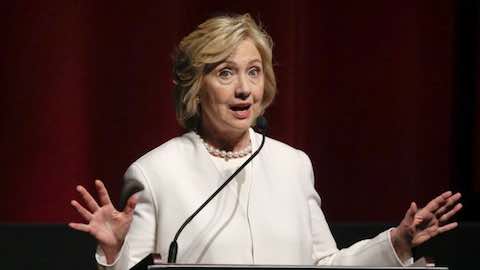 22 People, $43 Million: The People Doling Out the Dough for Pro-Clinton Super PACs

Using data from the Federal Election Commission, InsideGov found that 22 people have given a combined $43 million to super PACs backing Hillary Clinton's presidential run. From George Soros to Jeffrey Katzenberg, these are the top donors to pro-Clinton super PACs.

Super PACs backing former Secretary of State Hillary Clinton's presidential campaign have benefited from seven-figure contributions from a small group of donors, many of whom are well-known on the Democratic fundraising circuit. According to an InsideGov analysis of the most recent data available from the Federal Election Commission, 22 people have given a combined $42,957,904 to the trio of super PACs supporting Clinton.

Super PACs Priorities USA Action, American Bridge 21st Century and Correct the Record have raised over $69 million combined. Contributions of $1 million or more constitute about 62 percent of that total. The contributions come from people in a handful of sectors, including investment banking, venture capital, philanthropy and the entertainment industry. InsideGov examines each of the donors below.

Priorities USA Action, founded in 2011 to support President Barack Obama's 2012 presidential run, is the main super PAC backing Clinton. In January 2014 — a full 15 months before Clinton announced she would run for president — the group said it would support Clinton in the 2016 election. Priorities has raised about $55.6 million so far, according to the most recent data available from the FEC.

American Bridge and Correct the Record are opposition research super PACs, both founded by David Brock, a one-time conservative investigative reporter who became a supporter of the Clintons in the late 1990s. Brock was one of the first board members Priorities brought on when it shifted its focus to Clinton's 2016 run.

American Bridge focuses on Republican politicians, calling itself a "progressive research and communications organization," and asks supporters to "take out your iPhone and record it" if they hear a politician "playing fast and loose with the truth." But Correct the Record is laser-focused on supporting Hillary Clinton. According to its website, "Correct the Record is a strategic research and rapid response team designed to defend Hillary Clinton from baseless attacks."

Unlike candidate committees, super PACs can collect and spend unlimited sums of money. They cannot collaborate with the official campaign, and therefore cannot pay for things like campaign staffers' salaries or a candidate's travel. But super PACs can cut ads and distribute materials that support a specific candidate, which can make for some complicated moments on the campaign trail.

Compared to Clinton, Vermont Sen. Bernie Sanders has been incredibly outspoken about super PACs. Both Democratic candidates advocate for campaign finance reform, but Sanders often swipes at the Clinton campaign's fundraising and talks about how he — unlike Clinton — doesn't have a super PAC. On March 14, Sanders tweeted: "I don't have a super PAC and I don't travel the country begging millionaires to contribute to my campaign. This is a grassroots campaign."

Although he disavows the big-money groups, super PACs have provided support for Sanders' candidacy, including the National Nurses United for Patient Protection and Progressive Kick.

The nurses super PAC, which is affiliated with the largest union of registered nurses, collected $2.3 million last year and spent more than a million dollars on pro-Sanders ads and voter outreach materials. In January, Sanders blurred the lines a bit when he called the group "one of the sponsors" of his campaign. Clinton spokesman Brian Fallon cried foul over that language, saying it was an example of "Sanders saying one thing and doing another. For months he had criticized super PACs and pledged to shun them in his campaign, but all along he has benefited from hundreds of thousands of dollars in independent expenditures from one of those very organizations."

But Sanders' super PAC support still pales in comparison to how much pro-Clinton groups have raised. Of the remaining presidential hopefuls still in the race, pro-Clinton super PACs have raised the most money. As the visualization shows, the only candidate to get more super PAC support was Jeb Bush, the former governor of Florida who dropped out of the Republican nomination race in February.

The largest backer is George Soros, a hedge fund manager out of New York who is among the wealthiest people in America and is a frequent Democratic donor. In 2015, Soros gave a total of $8 million to pro-Clinton PACs: $1,000,000 in May to American Bridge, $1,000,000 in June to Priorities USA Action and $6,000,000 more to the same PAC in December.

Herbert M. Sandler, a banker-turned-philanthropist who lives in San Francisco, gave $2.5 million to Priorities, and Hollywood heavy-hitters Cheryl and Haim Saban gave the group $2.5 million apiece. The Sabans are longtime Clinton friends, supporting campaigns for both Bill and Hillary and giving significantly to the Clinton Foundation. In May 2015, less than a month after she announced her presidential bid, Hillary Clinton attended a fundraiser for her campaign at the Sabans' L.A.-area home, where guests were asked to give $2,700 to attend.

The billionaire founder of dieting shake company Slim-Fast, Daniel Abraham, wrote two $1 million checks to Priorities, one in December 2015 and the second at the end of January. In 1989, Abraham founded the S. Daniel Abraham Center for Middle East Peace, which advocates for a two-state solution to the Arab-Israeli conflict in the Middle East. In 2010, while secretary of State, Clinton spoke at a dedication ceremony in D.C. for the center. The Associated Press reported that, according to scheduling calendars retrieved with a Freedom of Information Act request, Clinton met with Abraham at least three times and was scheduled for another three meetings while at the State Department.

A trio of Chicago-based donors have doled out a combined $5.8 million to Priorities. Fred Eychaner — the openly gay owner of media company Newsweb Corporation who has given millions of dollars to left-leaning groups and super PACs — gave $2 million in February. According to the FEC, he has also contributed $5,400 to Clinton's official campaign committee, Hillary for America. Eychaner, whose propensity to eschew media interviews has led some to call him "mysterious" and "reclusive," hosted a fundraiser for Clinton last May at his home in the Lincoln Park neighborhood of Chicago.

J.B. Pritzker and his wife, Mary Kathryn, each gave $1.9 million to Priorities. J.B. runs a venture capital firm, and he and his wife lead the Pritzker Family Foundation, which focuses on early childhood development. (Full disclosure: Pritzker Group Venture Capital is an investor of Graphiq, the parent company of InsideGov.)

In 2008, J.B. was a national co-chair for Clinton's presidential campaign, breaking with his sister, Penny, who supported then-Sen. Barack Obama's White House bid. Penny Pritzker was the national finance chair for Obama's 2008 campaign and the national co-chair of Obama's 2012 campaign, and is the current secretary of the Department of Commerce. J.B. and Penny's father, Donald Pritzker, was a co-founder and president of the Hyatt hotel chain; the Pritzker family is one of the wealthiest in America, according to Forbes.

People Who Gave At Least $1 Million

Priorities received a $1.5 million contribution from David E. Shaw, a computer scientist who founded a quantitative trading-focused hedge fund in the late 1980s. He was appointed to the President's Council of Advisors on Science and Technology twice, first under former President Bill Clinton in 1994 and then under Obama in 2009. Shaw now runs D. E. Shaw Research, a computational biochemistry research group based in New York.

Laure Woods, a Bay Area philanthropist with a background in clinical research who currently heads up the Bay Area Lyme Foundation, contributed $1.5 million to Priorities. Woods is an active Democratic donor in Northern California, giving money to a handful of super PACs focused on abortion rights and electing women into political office.

Another Bay Area philanthropist, Steve Silberstein, gave $200,000 to Correct the Record and $800,000 to Priorities last year, according to the FEC. In the late 1970s, Silberstein founded a software company for library management, and he now donates hundreds of thousands of dollars to various progressive groups through his foundation.

The three groups supporting Clinton received almost $1.7 million total from Barbara Lee, a philanthropist who advocates for women in politics through her foundation.

Pro-Clinton super PACs also got $1 million contributions from a handful of other people. These donors include Jeffrey Katzenberg and Steven Spielberg, well-known Democratic supporters and DreamWorks co-founders; Thomas Tull, the billionaire founder and CEO of Legendary Pictures; and Pat Stryker, the philanthropist granddaughter of Homer Stryker, who founded medical technology company Stryker in 1941.

John Steve Mostyn, a personal injury lawyer in Houston, gave $1 million in January. In 2010, Mostyn and his wife contributed millions of dollars to help elect more Democrats in Texas state politics, including contributing to Bill White, the Democrat who ran against Republican Gov. Rick Perry.

Manhattan-based investment banker Bernard Schwartz doled out $1 million to Priorities in August. A lifelong Democrat, Schwartz kicked his political giving into high gear in the 1990s during former President Bill Clinton's tenure. At the time, Schwartz ran a telecommunications company that was part of a controversial satellite deal with China. Republicans accused Clinton of allowing the deal to go through because of Schwartz's fundraising support. As a Washington Post article from 1998 noted, "The Clinton administration has been good to Bernard Schwartz, and he to it."

When accounting for the three super PACs backing Clinton and her official campaign committee, Clinton has raised $229,336,628 so far this cycle, making her the far-and-away top fundraiser in the presidential race. The FEC releases its next round of campaign finance data on April 20, which will outline fundraising totals from March.

"22 People, $43 Million: The People Doling Out the Dough for Pro-Clinton Super PACs"