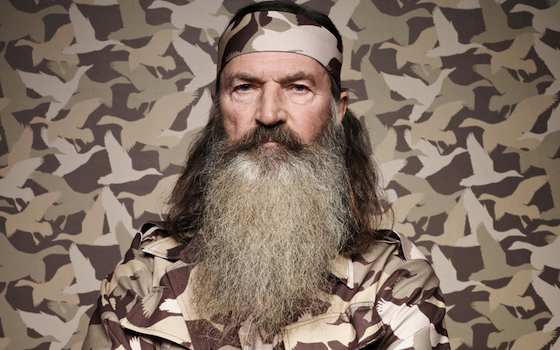 Yes, I know I'm not their target audience, as my big-city liberal, -driving, Chardonnay-sipping, hipster-professional friends are quick to remind me.

Worse, Phil Robertson, the patriarch of the popular A&E reality show's featured family, has run into a buzz saw of political incorrectness.

Why, I am asked, would I watch a reality show about a family of self-described "rednecks" in backwoods Louisiana who love to hunt and hit pay dirt by making and selling high-quality duck calls?

And I answer, "I have eclectic tastes." Besides, it's a funny show, beginning with the long beards that make Robertson, his sons Willie and Jason ("Jase") and brother Si look like tryouts for a ZZ Top tribute band. The Robertsons invite you to laugh with them, not at them.

To me, the show teaches what I think can be most valuable about TV: its ability to show how much, beneath the surface of our vast cultural diversity, we Americans share a lot in common.

Yet things we don't share in common often get in the way. With that in mind, I have had a feeling, especially after last summer's eruption over Southern-style chef Paula Deen's colorful views on race, that Grandpa Robinson's folksy backwoods candor was another cultural train wreck waiting to happen.

The self-proclaimed "Bible thumper" condemned "homosexual behavior" as a sin and, using imagery too graphic for a family newspaper, equated it with bestiality and promiscuity.

He also offended many African Americans with praise for those who worked "singing and happy" alongside him in cotton fields during his hardscrabble upbringing, "pre-entitlement, pre-welfare," with "not a word" of complaint about "these doggone white people."

"They were godly," he recalled. "They were happy; no one was singing the blues."

Say what? Since black folks invented the blues, maybe Grandpa Phil was just trying to be funny. Either way, A&E, among others, was not amused. The network put him on "hiatus from filming indefinitely." Those actions predictably draw a widespread backlash from fans and conservative commentators, including such Republicans as Sen. Ted Cruz of Texas, Louisiana Gov. Bobby Jindal and former vice presidential nominee Sarah Palin.

That's the sort of train wreck I feared was going to happen in this era of culture wars.

Now arguments over free speech and religious freedoms spoil the happy "Duck Dynasty" image. But I'm not mad at Robertson. His remarks are sadly typical of folks from his generation who, like Paula Deen, mistook day-to-day civility in the racially segregated South as black contentment with second-class citizenship.

I'm only upset with people who, when told that their views hurt a lot of people, don't want to understand why.

I don't agree with Grandpa Phil's biblical interpretations or his retrograde cracks about what social conservatives call "the gay lifestyle."

Nor do I believe "free speech" means anybody can say anything they want at anytime without risking consequences from their friends, neighbors or employers. That's why we've seen celebrities as varied as Alec Baldwin, Don Imus and Isaiah Washington lose work because of verbal insults to gays and others.

But I also believe that A&E overreacted in this case. His views may be wrong, in my view, but Robertson never made a secret of his religious conservatism. It is part of the show's appeal, albeit filtered through the network's editing process.

Robertson says he was only following what he believes the Bible teaches. Yet I was mildly encouraged that he restated his love for "all of humanity." The best answer to objectionable speech is more speech -- more honest debate.

Just as I have learned a lot about Robertson's world from watching his family's show, I think he could learn a lot from an honest chat with some of the people whom he has offended.

He even could invite some of them to one of his family's televised dinner prayers. He wouldn't have to televise it, but I'd love to see that show.