Democrats Have a Divide, Too 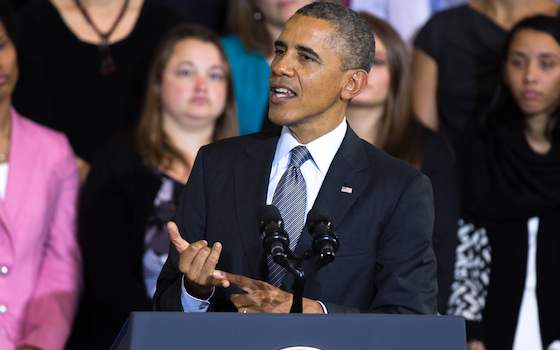 Is it too early for speculations? It'll be here before you know it. In fact, it's not hard to see how the run-up to 2016 already is having an impact on politics and policies in Washington today.

Amid all the talk -- and there's been plenty -- about whether Republican moderates can collar their tea party right wing, similarly impatient voices are rising on the left to remind us that Democrats don't always agree on everything, either.

Just as the tea party movement brought a new generation of populist lawmakers who scoff at old bipartisan rules and compromises, so have the Democrats.

Unlike conservatives who see President Barack Obama as some sort of Kenyan-Muslim-Marxist, progressive populists aim their criticism at his policies -- not him personally -- and presumably at those of Hillary Rodham Clinton, his party's current frontrunner in presidential polls for 2016.

You can see the impact of the new insurgents in, for example, Senate Majority Leader Harry Reid's (D., Nevada) abrupt end to the long-standing rule that required a 60-vote majority to overrule certain filibusters.

You could see it in the left's successful uprising against Lawrence Summers, Obama's widely reported first choice to chair the Federal Reserve, and in favor of Janet Yellen, who, among other distinctions, will be the first woman to hold the post.

And you can hear the left's wishful thinking in the media speculation about how and whether Massachusetts Sen. Elizabeth Warren, a leading critic of Wall Street excesses and deregulation, might pose a serious challenge to former Secretary of State Clinton in 2016.

Speculation about Warren heated up after a profile several weeks ago, followed by a profile in . It headlined Warren as Clinton's "nightmare" and potential "face of the insurgency" against Clinton's rise by fanning populist anger toward Wall Street and Washington.

Yet, as much as I am excited as a political junkie by any prospect of a primary fight, I still call the Warren speculation wishful thinking for several reasons, not the least of which is her own past denials of an intention to run in 2016.

She also joined other Senate Democratic women in a recent letter to Clinton that urged the former Secretary of State to run. For Warren to challenge Clinton now would be a major flip-flop.

Democrats also appear to me to be more determined than ever to nominate her. After her hard-fought 2008 primary battles, she has a vast base of disappointed supporters who believe that now, at long last, it is her turn.

That helps to explain why a CNN Poll at the end of November found Clinton leading overwhelmingly with 63 percent of Democrats and independents who lean Democratic. At a distant second, Vice President Joe Biden received 12 percent, followed by Warren with 7 percent.

Yet little of that chills the draft-Warren movement among progressives who don't like Clinton's ties to Wall Street or her speeches to major banks on her paid speaking circuit.

Like other factional uprisings, the draft-Warren movement gives voice to an important way of thinking in the Democratic base: a subset that believes, for example, that President Obama's health care plan, denounced as "socialist" by the right, actually is not socialistic enough.

In other words, if Obama had won passage of a simple single-payer program like universal , one of the government's most popular programs, he wouldn't have such headaches as the Affordable Care Act's websites. Team Obama would respond: Single-payer couldn't win enough votes to pass .

Just as the right is divided between pragmatic "establishment" Republicans and their more conservative tea party wing, Democrats are divided between their pro-corporate moderates and more progressive populist wings.

As the end of Barack Obama's presidency approaches, so does his ability to provide a unifying force in his famously factional party, as it was described in Will Rogers' immortal quote: "I am not a member of any organized party -- I am a Democrat."

But the tradeoffs that have to be made by, for example, corporate-friendly Democratic mayors and governors between liberal ideals and pragmatic results continue to divide Democrats and sway elections as much as ever.

Democrats Have a Divide, Too