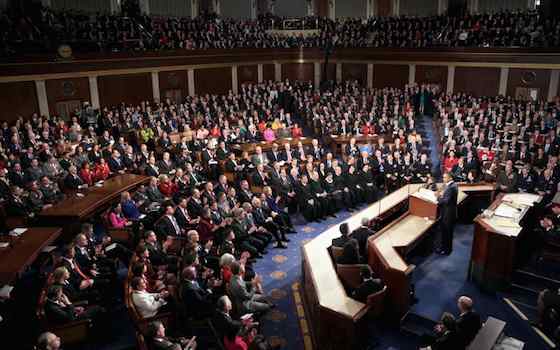 Fifty years later, it's hard to imagine the enactment of the Civil Rights Act by today's polarized . Maybe, as the old saying goes, today's fighting is so vicious because the stakes are so small.

We Americans fight less among ourselves when we clearly face a common enemy or crisis. In the immediate aftermath of the Sept. 11 terrorist attacks, for example, we showed a heartwarming level of national unity and sense of purpose for, oh, at least five or six days or so.

Today the bitter partisanship in Washington is so fierce that one almost blinks in disbelief to see former President George W. Bush, a Republican, appearing on the same program with current President Barack Obama and two other Democrats, former Presidents Bill Clinton and Jimmy Carter. But the occasion was a Civil Rights Summit at the to mark the 50th anniversary of the President Lyndon B. Johnson's biggest legislative breakthrough, in my opinion, the 1964 Civil Rights Act.

This is an appropriate time for such a look into the rear-view mirror of time, if only to appreciate with new eyes the historic significance of the battle to pass the Civil Rights Act. It amounted to nothing less than the last lingering battle of the Civil War -- if you believe (as some people apparently don't) that the Civil War is really over.

In the space of what now seems like a few short years, which also were my early teen years, a new war seemed to be breaking out. The ferocity was enhanced by television news, an industry still coming of age. Almost daily in 1963, we were exposed to images such as Birmingham police dogs and firehoses sicced on peaceful civil rights protesters, a bombed Birmingham church where four little girls were killed on a Sunday morning and the assassination of Medgar Evers, a Mississippi civil rights leader, shot by a sniper on the very evening after President John F. Kennedy announced his introduction of the civil rights bill.

After Kennedy's assassination that November, the bill was left to LBJ, which sounded on my side of town like bad news. As majority leader of the , LBJ, a Texas Democrat, and his Southern segregationist colleagues had helped take the enforcement teeth out of Dwight Eisenhower's 1957 Civil Rights Act.

But as president, Johnson rose to a higher moral and historic calling. He rallied enough support from both parties to enact, by many accounts, a stronger civil rights bill than the less-experienced JFK could have achieved.

It is that feat, accomplished with a majority of Republican votes to override the fierce resistance of Southern segregationist Democrats, that leads many to ask today whether the Civil Rights Act would survive today's .

My first reflex is to answer no. Even such formerly routine matters as an extension of unemployment benefits fall dead in the water these days. But this also is not , LBJ's times or, in the Oval Office, LBJ's style of leadership.

As many others point out, LBJ had deep and long-running relationships on and unrivaled talents for legislative mechanics. As Jonathan Alter so eloquently put it in his book "The Center Holds: Obama and His Enemies," President Obama is missing a similar "Schmooze Gene" to drive him to similarly relentless prodding, cajoling and arm-twisting.

But even if he had it, Obama's close associates say, he would not have a that would be nearly as cooperative as the one with which Johnson worked in the wake of Kennedy's assassination.

LBJ enacted a sweeping, landmark civil rights bill on behalf of equal rights for women and minorities. But, in the week of the law's 50th anniversary, Senate Republicans blocked a much more modest Democratic-backed Paycheck Fairness Act aimed to even the pay gap between men and women.

Would the Civil Rights Act run up against a similar brick wall today? The politics and issues are different. The strong conservatism that dominated yesterday's Southern Democrats is found more conspicuously in today's , partly because of LBJ's achievements.

That shift began significantly in the backlash years immediately following LBJ's civil rights legislation. As minorities and others who favored activist government flocked to the party of LBJ, the Republican base became more white and also shifted to the South and to western mountain states. Today in its support of states' rights and opposition to "big government," the Party of Abraham Lincoln sounds more like the party of the old Confederacy.

And compared to today's political landscape, the civil rights divide in LBJ's day was a more clear-cut choice between injustice and equal opportunity. In today's civil rights debates, both sides call for the same principles -- "freedom," "equal rights" and "opportunity" -- but have very different definitions of what those words mean.