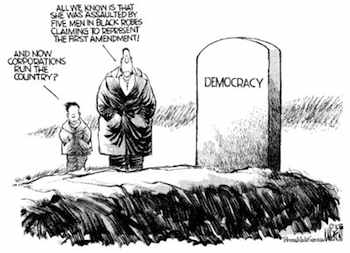 In one of the most contentious rulings in recent history, the high court overturned decades of legal precedent that limited how corporations, unions, and other organizations can participate in the political process. The 5-to-4 decision is all but certain to dramatically reshape the conduct of elections in the United States, campaign finance experts say. But experts remain divided over the ways in which elections, saturated as they already are in money from various sources, will change.

Retired Justice Sandra Day O'Connor this week told that she hoped the recent decision wouldn't mean a flood of new money in elections, but feared that it would. She also raised the issue of corporate funding of judicial elections, an issue which contributed to her rulings on the bench, which upheld McCain-Feingold legislation in 2003. She said she feared judges becoming "politically-elected figures in arms races."

The decision struck down a major pillar of the so-called McCain-Feingold campaign finance law, which barred corporations and unions from spending their funds on political advertising. Campaign finance supporters fear that with those restrictions lifted, corporations will come to dominate political discourse and politicians, once elected, will be more beholden to those interests. The ruling did not address legal bans on direct corporate contributions to candidates or rules requiring campaign finance disclosure. The court case on which Thursday's decision hinged concerned a politically motived conservative documentary targeting Hillary Clinton in 2008, when she was running for the Democratic presidential nomination.

Hillary the Moviewas funded in part by corporate money, which ran afoul of the law because it was deemed to be a form of political advertising. The case was first argued last March, but the justices called for a rare rearguing of it in the fall, signaling that it would be the vehicle for a more expansive ruling on the limits of campaign finance laws regarding free speech.

Conservatives hope the change in the law will lead to an infusion of corporate donations which are more likely to lean Republican. Liberals are hopeful that money will flow (at least in the next election) to incumbent candidates who are statistically more likely to win electoral contests. Media experts, meanwhile, point out that in an age of YouTube, big spending on things like TV time may be a fading concern. The justices split down familiar ideological lines, with conservatives John G. Roberts, Samuel Alito, Antonin Scalia, and Clarence Thomas joining Anthony Kennedy in the majority. "When government seeks to use its full power, including the criminal law, to command where a person may get his or her information or what distrusted source he or she may not hear, it uses censorship to control thought," Kennedy wrote for the majority.

The sharp disagreement on the court about the case was illustrated by Justice John Paul Stevens, who read from the bench for more than 20 minutes, giving excerpts from his 90-page dissenting opinion. The majority, he said, had reversed more than a century of established law that all previous justices had found passed constitutional muster, a "radical change." President Obama issued a statement similarly blasting the ruling, saying the court had "given a green light to a new stampede of special-interest money in our politics." He called for to devise new ways to limit corporate money in elections.

Many conservatives, long opposed to McCain-Feingold, cheered the decision, calling it a victory for the First Amendment. Liberal groups, meanwhile, were aghast, predicting a flood of new corporate cash that will probably skew in favor of Republican candidates. Calling the ruling a "terrible mistake," Wisconsin Sen. Russ Feingold, a Democrat, took comfort from the fact that "the decision does not affect McCain-Feingold's soft money ban, which will continue to prevent corporate contributions to the political parties from corrupting the political process."

The impact of the ruling will probably be felt in the 2010 midterm elections, less than 11 months away. Republicans are generally understood to be more aligned with business and corporate interests and therefore are expected to stand to gain more from the rollback of the campaign finance laws. On the other hand, Democrats are likely to be on the receiving end of more union largess. But Democrats say they will try to pass new laws to curb the impact of an influx of money into the election system. New York Democratic Sen. Charles Schumer pledged swift legislative action. And Democrats could have some Republican help. Maine Republican Sen. Olympia Snowe, who had cosponsored the McCain-Feingold law, called the ruling "disappointing" but said she would take a closer look at it before deciding what, if anything, should do about it. 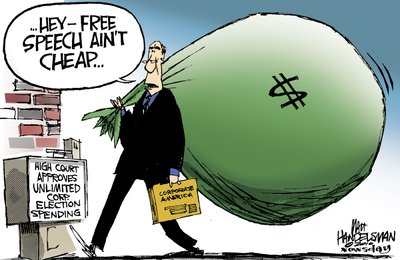