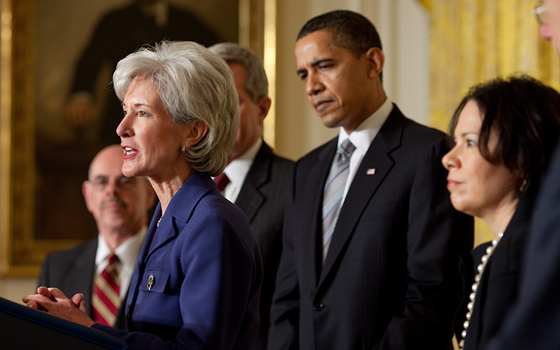 Seldom has a domestic issue so dominated the political center stage as Obamacare.

The president's health-care insurance law has ridden a policy roller-coaster and will still have a huge question mark hanging over it in 2014.

From the very start of Obama's presidency, the Republicans in took dead aim at what became the Patient Protection and Affordable Care Act. Obama was able to get it enacted only with solid Democratic support in 2010, while his party was still in control of both the House and .

Thereafter, the Republicans looked to the to declare the law unconstitutional, but were surprised and disappointed when Chief Justice John Roberts led a 5-4 decision upholding it. After recovering from that blow, Republicans set out to "repeal and replace" the law, which they hoped to stigmatize by attaching the president's name to it, with considerable success.

In 2012, Obamacare became a battle cry in Mitt Romney's presidential campaign, despite the fact that the health care law he enacted as governor of Massachusetts was a model for it. That reality made Romney a poor pitchman against the federal version, and Obama was re-elected. He seemed home free on the single most significant and hard-won legislative victory of his first term.

Still the Republican opposition continued, with party orators from the noisy tea-party wing leading the fight against the law. But the naysayers miscalculated this year in allowing the 16-day government shutdown over the budget. Polls consistently blamed the Republicans, and Obama appeared to be coasting toward the new year with the wind at his back.

But then, like some ghost out of the political past, Obamcare came rushing back as an issue with its calamitous rollout failure, fanning new life into the opposition.

All through the president's successful re-election campaign and thereafter, he had been busy touting the act's benefits and castigating its opponents as bearers of inaccurate information about how the law would work. Suddenly, the tables were turned on him as he was caught overselling parts of it. His oft-quoted line -- that if you liked the insurance plan you had, you could keep it -- backfired on him. Insured Americans started receiving cancellation notices from insurers whose plans did not meet ACA standards.

Obama found himself scrambling to assure them that they could qualify for better coverage at less cost, a claim that he was hard-pressed to justify. Obamacare foes were thrown lifeline with which to resurrect their opposition.

As a result, as the president approaches his last three years in office, more of his own political energies are being required to get Obamacare back on track, by cobbling together a more workable registration website and a renewed and revamped sales pitch on the details of the law.

As for the Republicans, fearful before the rollout fiasco that their ill-conceived role in the government shutdown would cost them votes in next November's congressional elections, instead are looking optimistically toward them. The chances are good that the midterm voting will be seen as a referendum on Obamacare, obliging the Democrats to fight all over again the battle they thought they had won in Obama's re-election.

If so, the president's year-end objectives of reviving such stalled legislative initiatives as immigration reform and tougher background checks on gun purchasing may have to give way. Much, to be sure, will ride on the public response to the efforts to re-sell Obamacare in this suddenly more uncertain climate.

Optimistic Democrats cite similar early glitches in the introduction of , and before they were widely embraced and lauded by recipients. But none encountered the storm stirred up so far by the law that bears this beleaguered president's name.

Those programs, regarded the heart of the social safety net, have been a magnet for Democratic support from poor and middle-class voters. So it's not so surprising that Obamacare has become such a fierce partisan political battleground for so long.