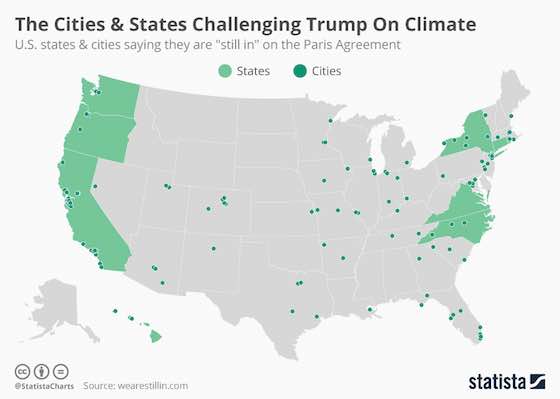 This chart shows the American states & cities saying they are 'still in' on the Paris Agreement.

Many American cities have pledged to continue the fight against climate change after the hugely controversial decision by U.S. President Donald Trump to withdraw from the Paris agreement. At the beginning of this week, 1,219 governors, mayors, businesses, investors and colleges and universities had added their signatures to the "We Are Still In" coalition. The initiative is an effort to coordinate the growing backlash and frustration following Trump's decision.

As he made his speech in the White House rose garden outlining his intentions, Trump claimed he was elected to represent the citizens of Pittsburgh, not Paris. However, Pittsburgh mayor Bill Paluto countered that 80 percent of his city's vote in the election went to Hillary Clinton, adding that Pittsburgh stands with the world and will follow the Paris agreement. It comes as little surprise that Paluto's city is among the coalition signatories, along with Boston, Chicago, Los Angeles, New York and San Francisco. The states that have signed thus far are California, Connecticut, North Carolina, Oregon, New York, Rhode Island, Virginia, Washington and Hawaii.

The 125 cities and nine states that have signed up to the coalition represent 120 million people and contribute $6.2 trillion to the American economy. 183 colleges and universities as well as 902 businesses and investors have also joined up. 20 Fortune 500 companies signed the growing list including Apple, Google, Microsoft and Nike.