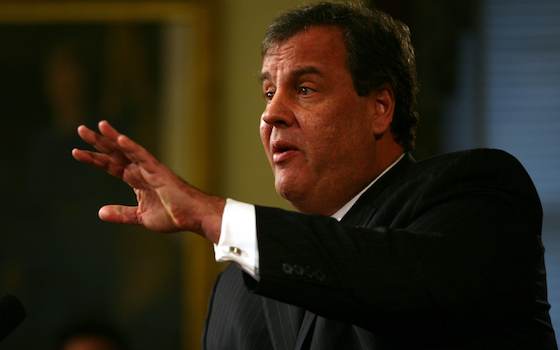 "(Chris) Christie is the caricature of a despot," writes Chris Hedges of the reeling New Jersey governor. "He has a vicious temper, a propensity to bully and belittle those weaker than himself, an insatiable thirst for revenge against real or perceived enemies, and little respect for the law and, as recent events have made clear, for the truth."

And he still might wind up becoming our next president.

This is our kind of guy -- media spectacle, bully, errand boy for the moneyed interests. His presidential aspirations may not survive "bridge-gate," but in his national prominence he sure defines the abject state of American democracy. We give power to would-be despots, "caricatures" only in the sense that they lack life-and-death control over their subjects and are forced to express their wrath through lane closures and the infliction of mere inconvenience on their political foes.

How come our system rewards rather than weeds out ruthless jerks with huge egos and superficial values? Indeed, how come politics and "values" seem to be as self-repellant as oil and water? How come linking them in a sentence is mainly a good way to make cynics snort?

"It's because these days Americans have as much familiarity with democracy as they do with homesteading on the frontier," Arun Gupta wrote last week at . I think he's on to something.

"Our lives are bereft of democracy," he went on. "Virtually all schools are authoritarian, as are churches. Families teeter between parental authority and youthful insubordination. . . . Say 'workplace democracy' to anyone at the office and blank stares is the best reaction you can hope for."

"Democracy" as no more than a political system is rote and mechanistic, consisting of elections, term limits, checks and balances. It's an impediment to power, easily gamed, a nuisance to be worked around rather than a profound set of values at our social core. In this compromised system, such values -- respect, empathy, compassion, equality -- have the depth of a press release. At this point in our political history, they've degenerated into a joke. The only real value holding the system in place is a reverence for money.

Obviously, there's no quick fix for this. But Gupta's observation -- that our lives are "bereft of democracy" -- opens up a way of looking at the situation that goes beyond moaning and tinkering.

It isn't so much that our democracy is coming apart as that it was never truly in place -- certainly not at an everyday level, and certainly not in any depth.

The everyday values we thoughtlessly espouse are about victory and authority far more than they are about connection and respect. We fear each other more than we trust each other, and of course we're far more certain of our enemies than our friends. Until fairly recently in our history, racism was embedded in the national consciousness as thoroughly as the desire for money. It probably still is. How can we expect to have a functioning democracy when we believe in it so tentatively and mostly ignore its principles in our efforts at community-building at every level?

I ask these questions with a sense of hope and promise. I'm convinced that the human impulse toward democracy is powerful and deep; it's bigger than Chris Christie's lust for power and will outlast our current capitulations to celebrity and wealth. A democracy movement has quietly taken root in this country and around the planet, and it's growing. I know such change isn't easy, but I sense it may be inevitable. It's our way out of the destructive entropy of war, poverty and environmental devastation.

One name for it is restorative justice, a concept that begins with an acknowledgement of the true nature of power: I call it power with rather than power over one another. While respecting people's differences, it transcends hierarchy. One venue where it's growing is in our troubled school systems, with students, teachers and administrators rethinking and restructuring their relationships with one another, engaging more in dialogue than order-giving, punishment and rebellion.

"At the core of restorative practices is the belief that people will make positive changes when those in positions of authority do things with them, rather than to them," writes Caralee Adams at scholastic.com, citing Ted Wachtel, founder of the . "People accept decisions more readily if they have input."

That's kind of what democracy is supposed to mean, and what better place to build belief in it than at school? Here in Chicago, where I live, restorative justice is making huge differences in the schools where it's taking root. It's replacing punishment-based disciplinary practices with dialogue -- eye contact, listening, understanding -- and giving youthful rivals a tool other than fighting to resolve grievances with one another.

And get this: A similar concept is making inroads at the nation's medical schools, those oppressively hierarchical burnout centers for would-be doctors. David Bornstein, writing last fall in The , described a new sort of class now being taught at half of the med schools in the U.S. Called The Healer's Art, it's modeled after a class initially developed by Dr. Rachel Naomi Remen, a professor at the .

"The Healer's Art is predicated on the idea that medicine is an ancient lineage that draws its strength from its core values: compassion, service, reverence for life and harmlessness," Bornstein writes.

". . . To help people tap into these deep currents, the course is delivered in an unusual manner. Students and faculty members meet together in small groups in the evenings, participating side by side as equals. There are no experts, no hierarchies, no wrong answers; anyone may speak about his or her experiences or simply listen."

Such changes in our world are still mostly below the social radar, but I suspect they are more widespread than anyone imagines. I hope so, because any attempt to repair our democracy -- to transcend Chris Christie Syndrome -- will be superficial and, ultimately, futile without them.