Can Jeb Bush Even Spell Integrity? 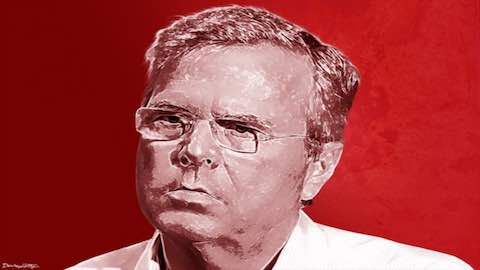 If you're a presidential aspirant and you have to tell people you're a person of integrity, chances are you're not.

Those odds get worse if you have to hire someone else to attest to your honor. How intriguing, then, that Kristy Campbell -- a spokeswoman for Jeb Bush’s presidential campaign -- felt moved to tell us that “Jeb’s record” is “one of integrity.”

This testimonial from a paid flack follows the still-evolving news story that Bush immediately cashed in on his name and state government contacts after leaving the Florida governor's office in 2007. Jeb became a richly paid legislative consultant and board member to major corporations that had received lucrative benefits from his own administration.

With cynical chutzpah, this presidential wannabe now campaigns as an ethics reformer, piously preaching against the corrupt coziness between moneyed interests and government officials. But in the last eight years, this scion of the Bush dynasty has pocketed at least $18 million in personal payment from his own quiet spins through the revolving door of government-corporate corruption.

Only four months out of office, for example, Jeb got a nice sinecure as a board member for the insurance giant Tenet Healthcare, which ran several of Florida’s private hospitals under the state Medicare program. In 2006, Tenet was found to have cheated patients and taxpayers with more than $1 billion in overcharges. To settle this malfeasance, the corporation paid only $7 million.

Meanwhile, Tenet recently gushed that it benefited greatly from Bush’s “extensive background in government service” and “his perspectives on public policy and social issues.” In heartfelt gratitude, this one corporation alone has put more than $2 million in Bush’s pocket.

Available at Amazon.com: Six Amendments: How and Why We Should Change the Constitution

"Can Jeb Bush Even Spell Integrity?"