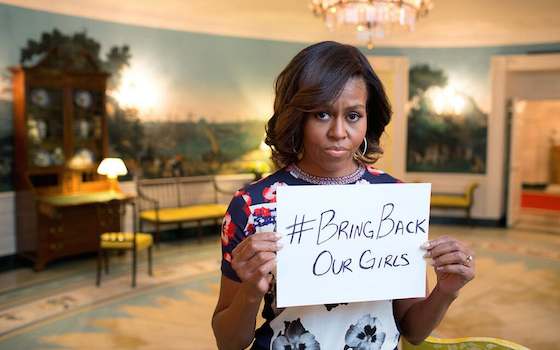 Your little boy lies in a hospital bed, stricken by a mysterious, potentially fatal disease. You are frightened and in despair.

But your community rallies around you. Soon, the whole town is talking about your ordeal. Neighbors you've never spoken to send cards. Co-workers you've never socialized with send encouraging text messages.

None of it changes the objective fact of your son's condition, doesn't kill a virus, lessen a fever or ease his pain. All it does is tell you that you and your child are being thought of, that you are not alone.

Rush Limbaugh would say it was. The would find it "simple-minded." George F. Will would regard it as "an exercise in self-esteem."

Or at least, that is what they have said about a roughly analogous situation.

You probably know the story. A terrorist group in Nigeria kidnaps nearly 300 schoolgirls. The reason is found in the abhorrent ideology from which it derives its name: Boko Haram -- Western Education Is Forbidden. The families of the girls turn to their government for help and it shrugs. The story is likewise ignored in America by "news" media too busy handicapping the chances of Hillary Clinton's grandchild in the 2054 midterms to bother with anything so picayune as a mass kidnapping.

So supporters take to Twitter with a hashtag: #BringBackOurGirls. It spreads like fire. Michelle Obama, Ellen DeGeneres, Malala Yousafzai, Jesse Jackson, Amy Poehler and millions of lesser-known names all join the campaign.

Does it "solve" the problem? Of course not. Who would be so naive as to think it would? Is it the only thing we should be doing in response? Again, no.

But does the international attention spur Nigeria's lackadaisical government to take the abduction more seriously and to accept international help -- including from the United States -- it has previously spurned? Yes. Does the hashtag campaign force media to pay attention to a tragedy that was being ignored? Again, yes. Moreover, it delivers to the parents of these girls the same simple, sustaining message as the cards and texts in the hypothetical above: We are with you.

It's hard to see how anyone -- anyone -- could regard that as a bad thing. But at least some political conservatives do. As noted, Limbaugh, Will and the have all pronounced themselves unimpressed. Donald Trump, Ann Coulter and Fox's Steve Doocy have also made attempts at ridicule.

There is something more than usually saddening about that.

It is a truth curdling into cliche that American politics is riven by a partisan gap, left wing and right wing estranged from each other like the husband and wife in some long, bad marriage. But in its behavior here, the right does not so much seem estranged from a competing ideology as from its own humanity.

How is this a thing? How is an expression of caring, concern and outrage deemed worthy of mockery and condemnation? Are these people truly that corroded with cynicism and bile? Is their criticism now just a tic, a reflex bypassing thought? Is every damn thing to be reduced to politics?

Once upon a time, we put politics to the side when tragedy came. Nowadays, that's something we seem less and less able -- or willing -- to do. That's a tragedy in itself.

Nearly 300 innocent girls were taken by madmen. Celebrities, political figures and everyday people wrote the social media equivalent of a petition to express their concern. That simple gesture begat a controversy -- and gave us a sobering new measurement of that partisan gap.

Apparently, it's so wide even compassion cannot get across.