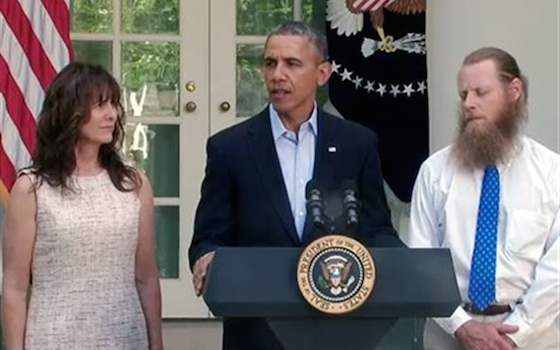 Euphoria over the Taliban's release of Army Sgt. Bowe Bergdahl was quickly tempered by media reports that Bergdahl had abandoned his post and that his father made comments opposing the wars in Iraq and Afghanistan. Bergdahl's father tweeted, "I am still working to free all Guantanamo prisoners. God will repay for the death of every Afghan child."

Does that include those children killed while being used as human shields by the Taliban? Where is Bergdahl's concern for women who die from "honor killings" and for girls who are denied an education?

The up-front cost of this "prisoner exchange" is the release of five terrorists from the U.S. prison at Guantanamo Bay. Future costs could be much higher. Not to mention the fact that news of the controversial exchange knocked reports on the VA fiasco right off the front pages. Was this partly the administration's intent?

Official U.S. policy has been "we don't negotiate with terrorists." Except when we do. Sgt. Bergdahl, America's only prisoner of war, was reportedly in failing health after more than five years in captivity and negotiations to secure his release were urgent and laborious, but freeing five dangerous men to secure the release of one soldier could very well put this country in increased danger. What should we have done? It depends upon the outcome one is seeking. If rescuing one man is paramount, then any price is worth it. But if that rescue leads to the deaths of others, as is likely, then the price is too high.

In a joint statement following President Obama's announcement of the terrorists' release, Chairman Howard P. McKeon (R-Calif.), and Sen. James Inhofe (R-Okla.), the ranking Republican on the , spoke of "...consequences for the rest of our forces and all Americans. Our terrorist adversaries now have a strong incentive to capture Americans."

The five terrorists include two senior militant commanders alleged to have been implicated in murdering thousands of Shiites in Afghanistan. The five have been shipped to Qatar. President Obama says the Qatari government has assured him they will be subjected to security restrictions and won't be a threat to the U.S. How does he know this? Even in a "moderate" Muslim state like Qatar, Islamic blood is thicker than the "water" of infidels.

The prisoner release is another in a growing list of executive actions that bypass , which has imposed strict statutory restrictions on moving detainees out of Gitmo. These include a determination by the secretary of defense that any transfers are in America's national security interests; that procedures are in place to substantially mitigate any future threats by the terrorists and most importantly, that receives notification 30 days before any planned release. received no such notice. Once again, President Obama has circumvented the law.

The track record of previous terrorist prisoners released from Gitmo is not a reason for confidence. According to a recent U.S. intelligence report, 603 prisoners have been freed from Guantanamo; 100 of them are confirmed to have returned to terrorism, and another 74 former inmates are suspected of returning to terrorism.

Wayne Simmons, a former CIA operative, told Foxnews.com what he observed during several visits to Gitmo: "These guys come in wounded, they take care of their wounds. No limbs? We give them brand new prostheses. Turn them loose, guy goes home, picks up arms and uses that leg to help kill us."

Brigadier General Jay Hood, who once ran Gitmo, confirmed this scenario in testimony before a House panel in 2005. About a detainee named Abdullah Mehsud, Gen. Hood said, "He came to us without one leg ... we fitted him with a prosthetic leg before he left while in U.S. custody." The cost was reported to be between . After his release, Pakistani officials say he directed an attack in Pakistan that killed 31 people. Two months later he blew himself up to avoid capture.

Radical Islamists are serious about killing in pursuit of their extreme objectives. Releasing their soldiers can only embolden them to take more Americans hostage. The deal for Sgt. Bergdahl may well turn out to have been a bargain with the devil.