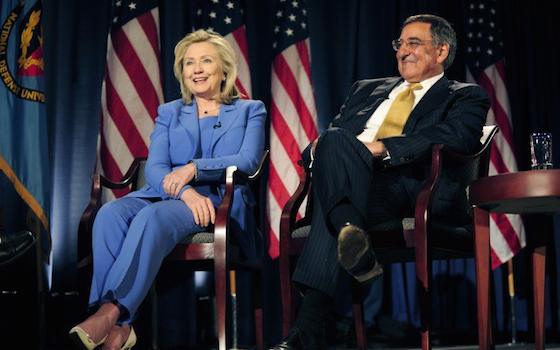 Three years ago, during the height of the Occupy movement, I was ejected from a congressional hearing for allegedly "assaulting" Leon Panetta, then Secretary of Defense and former Director of the CIA. He was testifying to the House Armed Services Committee about "lessons learned by the Department of Defense over the preceding decade." I jumped out of my audience seat to tell him that young people were paying the price of those "lessons," and we were sick of the government funding war instead of education. The baseless assault charges against me were ultimately dropped.

A few years and trillions of dollars later, I found myself sitting in front of Leon Panetta once again, this time for his book talk at George Washington University, where he was gunning for more war. Just when we thought the United States was finally leaving Iraq alone, the world was hit with a paranoid media frenzy: showcasing Islamic State beheadings ad infinitum, hysterical congresspeople claiming that they were "coming for us all," paving the way to more war, war, war -- no questions from the public, no congressional debate. Bombs started falling on Iraq and Syria, innocents are dying, the Islamic State is gaining traction, yet the White House is declaring the whole operation so far "successful."

Don't be fooled: this operation has indeed been a success for some. The weapons-making company Raytheon just signed a $251-million Pentagon contract to produce the Tomahawk missiles the United States is dropping on Iraq and Syria. Some media pundits speculate U.S. involvement for a few months, some a few years, but Panetta said we better count on closer to 30 years.

Despite Panetta's reputation for being a relatively "liberal" Democrat, his legacy is now associated with the expansion of President Obama's killer drone program -- covertly bombing countries that the United States wasn't, and still isn't, at war with, killing countless civilians with total impunity.

Without acknowledging America's role in creating the Islamic State, or how counterproductive and economically draining over a decade of war has been, Panetta has generated national attention recently for bashing President Obama for not going hard enough on the Islamic State. In his new book Worthy Fights: A Memoir of Leadership in War and Peace, and during an interview with Susan Page of USA Today timed to coincide with the release of his book, Panetta revealed his true feelings: that President Obama is deficient of leadership skills, indecisive, and weak when it comes to national defense and militarism.

Apparently this revelation, which Dana Milbank of the Washington Post described as "stunning disloyalty," comes as no surprise since Panetta has been jumping the gun to criticize President Obama since his time as Secretary of Defense. While in office, Panetta wanted to leave some residual troops in Iraq after the withdrawal in 2011, a deal he says could have been negotiated with more effort. He also wanted to arm the Syrian rebels as early as 2012, and frowned upon Obama's "failure to act" after seeking congressional authorization to bomb Assad in Syria in 2013.

So what does Panetta have to gain from attacking President Obama, a fellow Democrat, with so much time left until the next presidential election? Some media outlets think it's no coincidence that he's on a book tour at the same time as Hillary Clinton, touting the same hawkish foreign policies that will appeal to independent-leaning Republicans in 2016. As one right-wing outlet put it, "he's flying the same exact anti-Obama flag that the hawkish Clinton wing of the party has been flying all year trying to position themselves for the next stage in their own political careers by stepping on President Obama's neck."

Like Panetta, Clinton has made claims that the blame for the Islamic State's sudden power grab lands squarely on Obama's failure to intervene in the Syrian civil war. In an interview with the Atlantic, Clinton said America must develop an "overarching" strategy to confront the growing threat of the Islamic State, and she went so far as to equate this struggle to the one the United States waged against Soviet-led communism. It seems like these now-former Washington insiders are ganging up on the president to pave the way for a dangerous future foreign policy framework.

Panetta spoke at an event at George Washington University about his new book. CODEPINK teamed up with the George Washington Progressive Student Alliance to host a protest outside of the event. We passed out hundreds of fliers about the killer drone program under Panetta, and hollered over the megaphone about war criminals not being welcome on campus.

I made my way into the event and took a seat in the front row. The university president fawned over Panetta, who entered the room to a standing ovation.

Panetta bemoaned miniscule cuts to the massively bloated defense budget, saying that it is harmful to our national security. When he mentioned the sequester in that context, I couldn't stay in my seat any longer. "We need more cuts to the Pentagon's budget!" I said loudly, trying to move toward the stage so he would be able to hear me. "We don't want money for war spending, we need that money here at home," I continued. "Stop pushing the President to go deeper into war. Young people are sick of it, and the opinions of war criminals like yourself are not welcome here!" As I was talking, a large security guard plucked me up by my jacket and quickly yanked me out of the room.

Three years after my first disruption of Panetta, more than ever I stand by my words. I would do it again, and honestly, I probably will do it again. Whether it's Leon Panetta, or Hillary Clinton. I'm horrified at the prospect of Clinton being the more "liberal" presidential choice in 2016. If President Obama campaigned for hope and change, but ultimately enshrined some of Bush's most egregious foreign policies, what are we in store for next from explicitly pro-war candidates?

Many young people are sick of these war-mongers running the United States (and I know plenty of older folks who are too!). Over the summer of 2014, the youth wing of CODEPINK launched a Youth Manifesto to declare that there is No Future in War. Using that as a resource, we've launched a youth outreach campaign to help support student groups organize and mobilize. In a very short amount of time we've had an overwhelmingly positive response from students who are sick of being robbed of their futures. It's time for the old, worn out politicians, who have dragged us into more war just to get elected and fatten their wallets, to step aside. We deserve better than the broken two-party system that routinely forces us to choose the "lesser of two evils."

I, for one, am certainly not "ready for Hillary."

Alli McCracken is the National Coordinator for the peace group CODEPINK, based in Washington, DC. You can follow her on Twitter at @AlliMcCrack