Why are Bankers Still Being Treated as Beltway Royalty 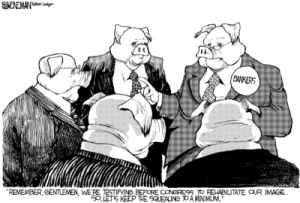 During his most recent press conference, President Obama said that he's been "sobered by the fact that change in Washington comes slow" and "humbled by the fact that the presidency is extraordinarily powerful, but we are just part of a much broader tapestry of American life and there are a lot of different power centers."

Well, one of those different power centers -- the entrenched special interests that continue to call so many shots on Capitol Hill -- is the main reason change in D.C. comes so slow.

This, of course, will not come as news to anyone who has paid even the briefest attention to Washington over the last 30 years. Indeed, I've been writing about it for over a decade.

But despite all that I know about the reform-killing power unleashed by the nexus of lobbying, campaign cash and legislation, I have been flabbergasted by the amount of behind-the-scenes influence recently being wielded by the banking lobby.

The bankers and their lobbyists -- who you might have reasonably thought would be the political equivalent of lepers in the halls of power these days -- have kneecapped substantive bankruptcy reform in the Senate, helped pull the plug on a government-brokered deal with Chrysler, and tried feverishly to throw up a roadblock in the way of credit-card reform in the House.

You heard me right. America's bankers -- those wonderful folks who brought us the economic meltdown -- are still being treated as Beltway royalty by those in Congress.

According to Sen. Dick Durbin, the banks "are still the most powerful lobby on Capitol Hill. And they frankly own the place."

When it comes to reforming our financial system, we are truly through the looking glass. I mean, since when did it become "to the vanquished go the spoils"? How do the same banks that have repeatedly come to Washington over the last eight months with their hats in their hands, asking for billions to rescue them from their catastrophic mistakes, somehow still "own the place"?

But the banks continue to be rewarded for their many failures.

The banks scored a lopsided victory when the Senate rejected an amendment that would have allowed homeowners facing foreclosure to renegotiate their mortgages under the guidance of a bankruptcy judge. The measure would have helped 1.7 million homeowners keep their houses, and preserved an additional $300 billion in home equity.

Given the tidal wave of foreclosures that have so destabilized our economy, this seems like a no-brainer piece of legislation.

But the banking lobbyists went after it with guns a-blazing -- even after Durbin and the measure's other backers seriously diluted the bill. These concessions did nothing to sway the Mortgage Bankers Association (whose members' subprime schemes have helped bring us to the point of collapse), the Financial Services Roundtable and the American Bankers Association, among other hired guns.

And their aim was true -- and deadly.

Heading into the vote, those pushing for reform hoped to gather the 60 supporters needed to bring the cramdown amendment to a final vote. Instead, Durbin struggled to find 45 senators willing to side with consumers.

As the Huffington Post's Ryan Grim reported, some of the key Democrats who voted against the measure have been on the receiving end of major banking-industry campaign contributions:

In the run-up to the vote, Durbin called it a "test": "Who is going to win this debate?" he asked. "The mortgage bankers and the American Bankers Association or the consumers across America?"

We just got our answer.

The shocking swagger of those in the financial sector was also evident in the negotiations that resulted in the announcement that Chrysler would file for Chapter 11 bankruptcy.

For much of the back-and-forth between Chrysler, its lenders and the Treasury Department, those lenders (comprised of banks, including Goldman Sachs, Citigroup and JP Morgan -- all recipients of bailout money -- and private equity firms) were playing hardball. They repeatedly rejected attempts by Treasury to get them to lower the amount of Chrysler's debt.

Picture this for a moment. On one side you have the Treasury, which has helped funnel tens of billions of dollars to these banks, making what it considers an equitable proposal. On the other side, you have the bankers, the recipients of that government largess, showing their gratitude by scoffing at Treasury's proposal and demanding a much, much better deal. Clearly, Goldman has gotten way too used to sweetheart deals like the 100-cents-on-the-dollar payout it received as part of the AIG bailout.

Treasury eventually upped the proposal to $1.5 billion (22 percent of what the creditors were owed) and a 5 percent equity stake in the carmaker. Again the bankers scoffed, before finally, at the 11th hour, agreeing to accept $2 billion (around 29 percent) and a small equity stake.

A Treasury official took a victory lap, calling the deal "an exceptional accomplishment in line with the president's firm commitment that all stakeholders sacrifice to make this deal succeed."

Then the 12th hour arrived and the hedge-fund managers, who hold around 30 percent of the Chrysler debt, decided they didn't want to sacrifice that much after all and refused to sign off on the deal -- even after the offer was sweetened with an additional $250 million. At least the hedge funds had not improved their balance sheets with billions in taxpayer dollars and government loan guarantees before scuttling the deal.

As for credit-card reform, the House's resounding 357-70 passage of Carolyn Maloney's Credit Card Holders' Bill of Rights would seem like a rare defeat for the banking lobbyists, who furiously opposed it. But a number of elements of the legislation demonstrate that even when the bankers lose, they still win. For instance, despite the desperate urgency of the situation, all but one of the consumer-friendly provisions of the bill won't take effect for a year. And the bill doesn't contain any cap on credit-card interest rates -- an amendment to cap rates at 18 percent never got any traction. And, of course, the bankers will get another crack at derailing credit-card reform when the Senate takes up its version of the bill, sponsored by Chris Dodd, later this month.

So no matter how badly the banking industry fails and how much its failures cost us, it continues to be Washington's 800-pound gorilla -- and the greatest risk to Barack Obama's presidency.

At his press conference, Obama bemoaned the fact that he "can't just press a button and suddenly have the bankers do exactly what I want."

It's too bad the same can't be said for the bankers, who keep pressing Congress' buttons, and getting pretty much what they want.