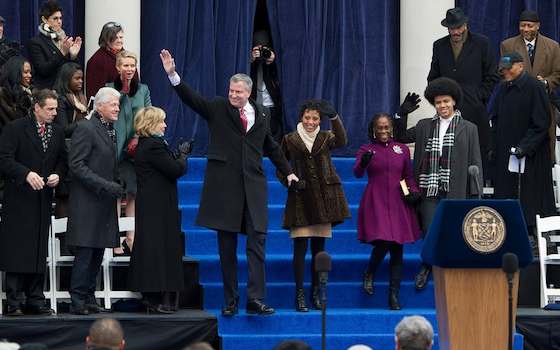 Much is being made of former President Bill Clinton's swearing-in of New York's new mayor, Bill de Blasio, with former Secretary of State Hillary Clinton and New York Gov. Andrew Cuomo at their side at City Hall. The cameo apparently sought to declare Democratic harmony in Gotham, that supposed bastion of liberalism.

In a sense, it was a gathering of the Clinton political clan. De Blasio was a one-time subordinate at the in the Clinton administration under then Secretary Andrew Cuomo, son of former New York Gov. Mario Cuomo, himself a liberal icon.

At the same time, however, the former president's reputation in the as a liberal-turned-centrist as a new kind of Democrat made his embrace of de Blasio's unqualified commitment to a progressive agenda seem a familiar refrain of Clintonian ideological dexterity.

Bill Clinton expressed his agreement with de Blasio's harangue against New York as the modern-day Tale of Two Cities, calling its income inequality "a moral outrage." But he also praised departing independent Mayor Michael Bloomberg for "leaving the city stronger and healthier than he found it."

Both Bill and Hillary Clinton have been faithful defenders of the Democratic tradition as the party of the people, as opposed to the Republicans as the party of business and Wall Street. Yet they have managed to make themselves targets of the liberal left, particularly during their joint challenge in the 2008 presidential primaries to Barack Obama, the liberal darling.

Yet Obama's own earlier firm hold on liberal hearts has been diminished by his perceived accommodations contrary to progressive objectives. A new political romance with freshman Democratic Sen. Elizabeth Warren seems to be blossoming on the party's left, which has compelled Hillary Clinton to intensify her attempts at courting it as she eyes a widely expected second presidential try in 2016.

All this suggests a possible revival of the responsible left wing of the that in 2000 failed then-Vice President Al Gore in key electoral states, bringing about the presidency of George W. Bush. It is little recalled now how Gore, while not fully utilizing the campaign skills of Bill Clinton, actually ran on the old liberal New Deal concept, declaring "they're for the powerful, we're for the people," and lost.

Indeed, after that election, Gore's graceless running mate, Joe Lieberman, blamed the ticket's defeat on Gore essentially for employing that slogan -- charging him with playing the class warfare card and implying they would have won had he run as the New Democrat as formulated by Clinton.

De Blasio's election is being trumpeted on the left now as an opportunity to revive progressivism as a governing principle on a major political stage, at a time when the hope that Obama would follow that course more faithfully as president has waned. So it makes prudent sense for the Clintons join in the progressive chorus in the period approaching the presidential primary elections of 2016.

Still, because this country remains so sharply divided ideologically, and Obama's most progressive initiative, Obamacare, is sailing through such stormy waters, the Clinton centrist course that won 1996 seems the safer one for his wife as she contemplates getting back to the .

To paraphrase an earlier unfortunate grammatical construction of her husband, it depends on the meaning of what progressivism is. The Republicans have been notably successful in demonizing the term "liberalism." Now that Democrats of the left are now more cautiously embracing "progressivism," the opposition will similarly demonize it.

As in the past, whatever label the Dems use, the Republicans can be depended on to characterize them as engaging in "class warfare," the old-reliable bogeyman -- reborn again in Mitt Romney's "47 percent of Americans" coddled into political subservience by social welfare bribery.

Meanwhile, as the Democratic left shows signs of revival, the needs to find a way to revive its own moderate wing, now all but vanished in the takeover of conservatism and tea-party obstructionism. The late 2013 budget compromise offers some mild hope of a step in that direction in 2014, to end this frustrating era of name-calling and divided government.