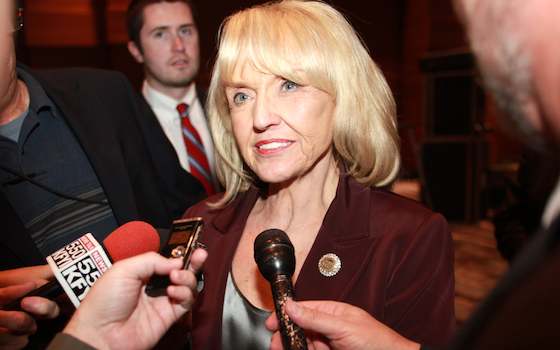 If Arizona legislators were being perfectly candid, they would have labeled their so-called Religious Freedom Restoration Act precisely what it was, the Right to Use Religion as an Excuse to Discriminate Against Gay Men and Lesbians Act.

Supporters insist it was not an anti-gay bill. But what else do you call a bill that uses religion to "protect" the right of businesses to discriminate against gay consumers?

Fortunately, the state's conservative Republican Gov. Jan Brewer did the right thing in my view, after weighing all of the alternatives. She vetoed the "Religious Freedom" bill after major business groups and prominent Arizona Republicans -- including some lawmakers who had voted for it -- insisted that it would be bad for tourism and other businesses.

But the issue is hardly going away. With similar "religious freedom" legislation pending in Kansas, Mississippi, Missouri and Oklahoma, conservative activists vow to press on.

As same-sex marriage has gained public, legislative and court approval at a much faster pace in recent years than anyone had much reason to expect, opponents have reframed the issue around the "religious freedom" argument and a powerful new symbol: the wedding cake.

Bakers in Colorado and Oregon lost cases that made national news after they claimed religious reasons for their refusal to sell wedding cakes to same-sex couples. Those decisions set off alarm bells, not only on the far-right. After all, a wedding cake may be an artful and tantalizing dessert to some of us, but to others it is a holy sacrament.

As a result, there are numerous open-minded Christians, for example, who believe in equal rights for gay men and lesbians, yet still think gay marriage is a sinful corruption of a relationship ordained by God himself.

Those who call for tolerance of such views, while disagreeing with them, include blogger Andrew Sullivan, who is openly gay, Roman Catholic and legally married to his husband. As much as he eloquently defends gay marriage, he also balks at the notion that government should force his beliefs on other Christians.

"I would never want to coerce any fundamentalist to provide services for my wedding -- or anything else for that matter -- if it made them in any way uncomfortable," he writes in a recent blog post. "The idea of suing these businesses to force them to provide services they are clearly uncomfortable providing is anathema to me. I think it should be repellent to the gay rights movement as well."

I respect Andrew Sullivan as a long-time acquaintance and brilliant blogger, but I have a different view of how merchants should treat the public. While he and others may frame it as "religious freedom," I frame it in terms of "public accommodations" as defined in the 1964 Civil Rights Act.

I am reminded of how 50 years ago a dramatic confrontation erupted between police and civil rights protesters who were picketing a barber shop in Yellow Springs, Ohio. The owner, Lewis Gegner, like other white barbers in town, refused to cut black people's hair. The jailing of 100 protesters put the town into national news only a few months before President Lyndon B. Johnson enacted the 1964 Civil Rights Act.

As an African-American teen who lived near that town at the time, I was bemused as to why anyone would want to get their hair cut by a hostile barber. It is hard enough to find good haircuts from friendly barbers.

But the principle behind the protests was easily understandable to me. Racial segregationists used to make the religious argument, too, claiming that God must have meant the races to be separate or He wouldn't have made us look so different. But if you're going to open up a business to the public, you should be willing to treat every potential customer with equal respect, whether you agree with their views or not.