An Appetite for Action on Tax Reform 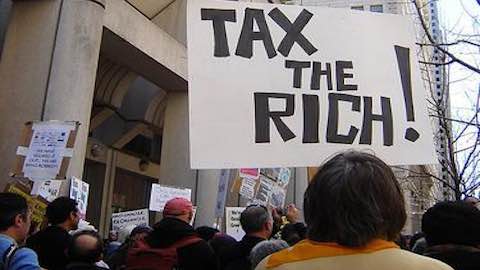 After the election, we need to focus on forcing the next president to address inequality and fix our upside down tax code.

This election will be over, and the task of governing will fall on the winning candidate and the reshuffled Congress. At the top of the list of issues to address in the early months of 2017 should be reforming our broken tax code.

Why should tax reform take center stage among the many issues plaguing the country?

Because Americans desperately want to see rising inequality addressed. Concern over the issue drove the insurgent Bernie Sanders presidential campaign and is top among issues of importance to Democratic voters.

Lest one think Sanders' primary loss gave the green light for inaction on inequality, note that the socialist senator from Vermont is currently the most popular politician in the country.

The growing divides between the rich and the rest of us rank consistently among the most pressing issues facing all voters, not just Bernie supporters. In short, the public's appetite for action is high, and the next president as well as Congress would do well to listen to them.

There are a number of drivers of inequality, but none are so obvious and so fixable as the deeply unfair tax code.

A review of tax returns by the New York Times last year showed the top one thousandth of 1 percent — the richest of the rich — pay just 17.6 percent of their income in taxes. For context, the top tax rate in the country, intended to tax these very people, is more than double that figure, at 39.6 percent.

Perhaps the most egregious poster child for the broken tax code is Donald J. Trump. The billionaire appears to pay zero federal income taxes. In other words, the major party presidential candidate has contributed nothing to the development of our roads and bridges, our schools and public parks, or any of the other essential public services that taxpayers make possible.

But Trump's far from the only offender.

Wealthy households and their armies of lawyers and accountants are able to dodge paying their fair share through loopholes they helped put in place. The same goes for the most profitable corporations, many of which have also dropped their federal income tax rate to zero. Plenty of these corporations are exploiting offshore tax shelters to avoid paying over $700 billion in taxes.

It's now commonplace for these elites to spend millions to save billions on tax reform. Meanwhile, working and middle class families, who don't have millions to spend on lobbyists or “creative” accountants, are left to fill the hole.

The solutions to fix the tax code and thus make a dent in reversing inequality are straightforward.

Close the expensive loopholes and offshore tax havens that only exist to encourage tax evasion. Update the tax code to ensure those who make their money via investments or inheritance pay taxes on their income the same way people who punch a time clock do.

Of course, the simplicity of a solution doesn't imply it'll be easy. Powerful forces aligned to create the unfair tax code we have now, and they’ll go to great lengths defending it. An equally powerful movement will be required to overcome this, on par with the social movements required for all the major steps forward our country has taken in its history.

The conservative anti-tax activist Grover Norquist famously said, “You win the tax issue, you win all the issues.” On this point, he was right.

Josh Hoxie directs the Project on Taxation and Opportunity at the Institute for Policy Studies. Distributed by OtherWords.org.

Politics: "An Appetite for Action on Tax Reform"