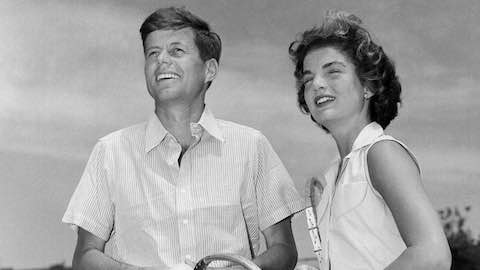 The life of JFK and the American Camelot has found immortality in the memories and imagination of Americans. From plays and films to alternative futures and a time-traveling web series (based on a book by Stephen King), the image of President John F. Kennedy remains ingrained in American culture. Recent revelations regarding his notorious infidelity still make headlines in the 21st century, more than 50 years after his assassination.

One must move beyond the tabloids in order to grasp his place in history. Despite his presidency lasting fewer than three years, Kennedy and his leadership during the height of the Cold War remains iconic of a bygone time in American history. His powerful speeches, contribution to Civil Rights and skillful diplomacy abroad are small pieces of what defined his time in office.

Looking beyond the myth, InsideGov pulls 25 essential facts about this Democratic leader from its presidential database. From cigars and ponies to the brink of nuclear war, we explore the unique intricacies of JFK's life.

Long before he was the president of the United States, Kennedy won the 1957 Pulitzer Prize in Biography for his work titled "Profiles in Courage." This best-seller provided biographical profiles on eight U.S. senators who displayed what Kennedy considered great political courage.

The American economy experienced a 1.18 percent inflation rate in 1962, the highest during Kennedy's presidency. This is shy of the ideal inflation rate of 2 percent, which indicates a growing economy.

From February 1961 to November 1963, the workforce grew with a 1.2 percent drop in unemployment rates. In his 1961 State of the Union address, Kennedy proposed: "We must show the world what a free economy can do -- to reduce unemployment, to put unused capacity to work, to spur new productivity and to foster higher economic growth within a range of sound fiscal policies and relative price stability."

Although Kennedy struggled to pass physicals for military service due to a variety of health issues, he went on to serve in the Navy during World War II. His honorable service earned him a Purple Heart and a Navy Marine Corps Medal.

Both of Kennedy's Supreme Court nominations, Byron Raymond White and Arthur Joseph Goldberg, were successfully approved by the Senate. Goldberg resigned from the Supreme Court after three years after being appointed as the Ambassador to the United Nations by President Lyndon B. Johnson.

During the Kennedy administration, the U.S. experienced, on average, 3.1 percent annual GDP growth. This moderate growth indicates how the U.S. economy recovered from the 1958 recession.

John and Jacqueline Kennedy had a total of four children together, two of whom died in infancy. Caroline Kennedy currently serves as the U.S. Ambassador to Japan. In 1999, John Jr. died at the age of 38 along with his wife in a plane crash. 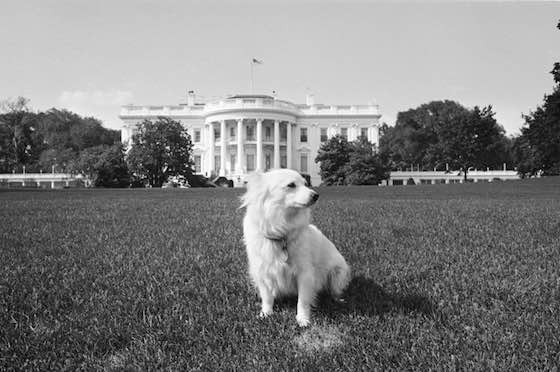 The Kennedys were known for owning a variety of animals during their time in the White House. They had five dogs, five horses, two parakeets, two hamsters, a cat, and a rabbit named Zsa Zsa. One of the dogs, Pushinka, was a gift from then-Premier of the Soviet Union Nikita Khrushchev.

During his presidency, Kennedy visited six European countries and Vatican City. These countries were the U.K., Ireland, France, Italy, Austria and West Germany. As the only Roman Catholic president, Kennedy's meeting with Pope Paul VI at the Vatican retains special significance.

At a height of 6 feet, Kennedy is one of the taller American presidents.

During his time in the White House, Kennedy made nine Oval Office speeches. One of his most memorable speeches occurred on Oct. 22, 1962, when he informed the public about the unfolding events of the ongoing Cuban Missile Crisis. He stated, "The cost of freedom is always high, but Americans have always paid it. And one path we shall never choose, and that is the path of surrender or submission."

The Cuban Missile Crisis went on for 13 days during October 1962. This diplomatic crisis, remembered as "the closest the world has ever come to nuclear war," consisted of a direct confrontation between the U.S. and Soviet Union over nuclear missiles in Cuba. A year after its peaceful conclusion, both the United States and Soviet Union signed the Limited Nuclear Test Ban Treaty, which prohibited most aboveground nuclear tests.

During his presidency, Kennedy vetoed a total of 21 pieces of legislation, with nine pocket vetoes and 12 regular vetoes. President Franklin D. Roosevelt holds the record for issuing the most vetoes, with a whopping 635. 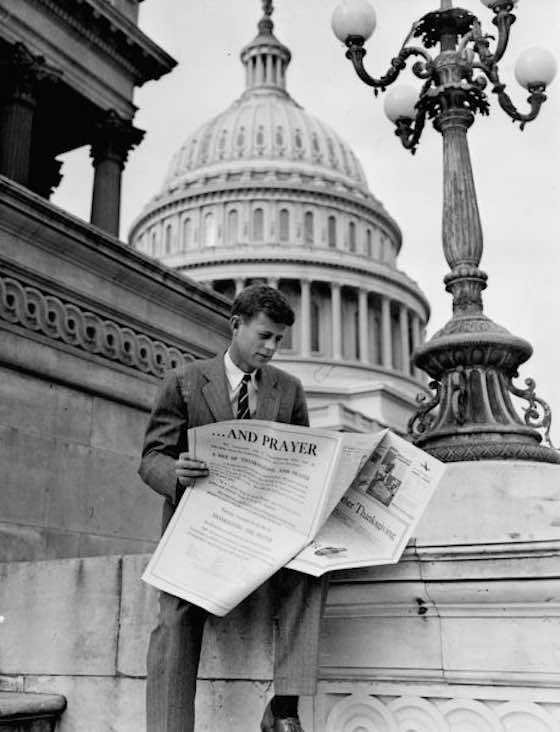 The Kennedys are well-known for their notable careers in public service. JFK successfully ran for a seat in the U.S. House at the age of 29. He would serve three terms before setting his ambitions on the Senate in 1952.

Kennedy was a relatively popular president, with his highest approval rating reaching 80 percent in April 1961 and once again in March 1962. His notable popularity with the American public continues into the 21st century.

Kennedy issued a total of 214 executive orders during his presidency. Executive Order 10924, issued on March 1, 1961, established the Peace Corps. He envisioned that the international service organization would consist of a "pool of trained men and women sent overseas by the United States government or through private institutions and organizations to help foreign countries meet their urgent needs for skilled manpower." 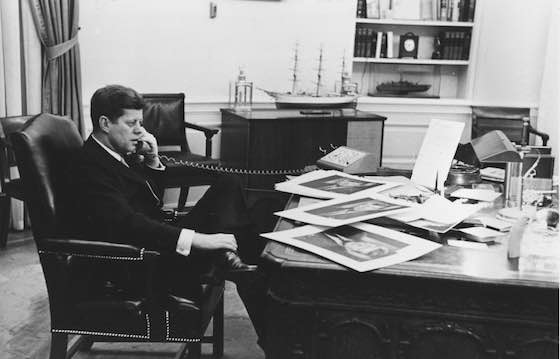 Starting in the spring of 1962, Kennedy began recording meetings and telephone conversations, reportedly for keeping records for his memoirs. A total of 260 hours of recordings have been released by the Miller Center, an affiliate of the University of Virginia.

The Kennedy administration accomplished sending the first American into earth's orbit when the Friendship 7 reached a record altitude of 162 miles. This accomplishment served as a testament to JFK's contributions to the space race, where he was determined to have Americans on the moon "before the decade is out." John Glenn Jr., the astronaut aboard the Friendship 7, went on to serve as a U.S. Senator for Ohio and earned a Presidential Medal of Freedom.

In the 1960 general election, Kennedy received 303 electoral votes and 49.72 percent of the popular vote. The Republican nominee opposing Kennedy was then-Vice President Richard Nixon (Nixon was later elected president in 1968).

President Lyndon B. Johnson ordered an investigation into Kennedy's assassination, which resulted in the 888-page Warren Commission Report. The analysis of evidence concluded Lee Harvey Oswald was the sole assassin on Nov. 22, 1963. The contents and scenarios included in the report provided fodder for years of conspiracy theories regarding the true circumstances of Kennedy's death. 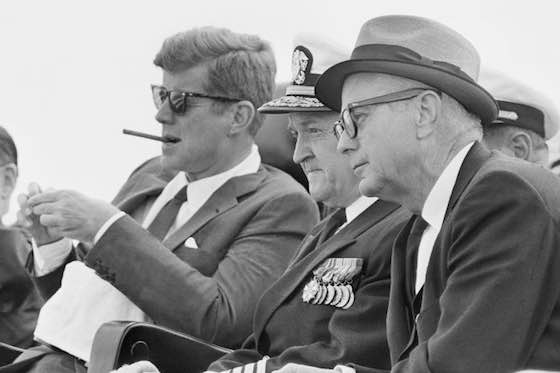 Kennedy, a renowned cigar smoker, allegedly ordered 1,200 Cuban cigars the day before the beginning of the Cuban embargo.

On April 17, 1961, a group of over 1,400 CIA-trained Cuban exiles landed on the beach of Cuba's Bay of Pigs. Their mission was to conduct a military intervention that would overthrow the communist regime of then-Prime Minister Fidel Castro. The plan failed and the majority of militants were captured. This botched covert operation was initially planned under President Dwight Eisenhower, but was signed off by Kennedy.

There were 16,300 U.S. advisers working in South Vietnam at the time of JFK's death. This reflected the support Kennedy pledged to South Vietnam President Ngo Dinh Diem in their combined efforts to contain communism. This partnership ended abruptly as Diem was assassinated by Vietnamese forces on Nov. 2, 1963, a few weeks before Kennedy's untimely fate. Recordings of private conversations suggest Kennedy felt guilty for Diem's death and felt "we must bear a good deal of responsibility for it."

First lady Jackie Kennedy took full control over the $50,000 budget reserved for White House renovations. She ushered in a new era of style and added historically significant antiques. Upon completion of the renovations, the first lady gave a televised tour of the White House on CBS. Her part in the TV special earned her an Emmy Award.

Under the Kennedy administration, an average of $3.9 billion in economic and military aid was sent annually to India. This unique relationship grew out of the Sino-Indian War, a 1962 border dispute between India and China. The U.S. support for India against a potential Chinese invasion fell in line with Kennedy's goals to contain communism.