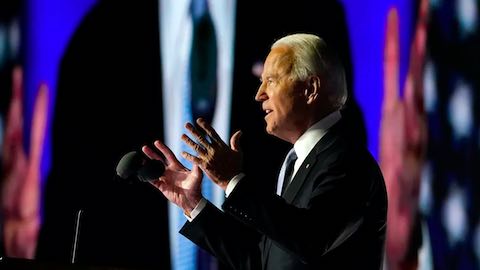 On day one, a newly inaugurated President Joe Biden will have to address a devastated economy – much like he and former President Barack Obama did a decade ago.

What can the country expect?

Forecasting how the economy will perform under a new president is generally a fool’s errand. How much or how little credit the person in the White House deserves for the health of the economy is a matter of debate, and no economist can confidently predict how the president’s policies will play out – if they even go into effect – or what challenges might emerge.

Regardless, voters tend to believe it makes a difference. And going into the election, 79% of registered voters – and 88% of Trump supporters – said the economy was their top concern. Given that, historical data suggests that those who are concerned with the economy have reason to be fairly satisfied with the election results: The economy generally fares better under Democratic presidents.

Biden will be inheriting an economy with serious problems. Things have improved markedly since the darkest days – at least, so far – of the pandemic back in the spring, but the economy remains in a dire state.

The latest jobs report shows that 11 million people remain unemployed – a third of whom have been without a job for at least 27 weeks – down from a peak of 23 million in April. Tens of thousands of small businesses and dozens of major retail chains have closed or filed for bankruptcy. Many states, cities and municipal agencies are reeling from the tremendous costs of spring lockdowns. And the economy has contracted 2.8% since the end of 2019.

And that doesn’t include the impact of what some officials – including Biden – have dubbed a “dark winter,” as severe coronavirus outbreaks in many regions of the U.S. prompt new economic restrictions.

In trying to get a sense of what kind of impact the election result will have on the economy, the past is a useful guide.

I study how the economy performs depending on which political party is in charge. Earlier this year, I did an analysis of this question, focusing on 1976 to 2016, and recently updated the data to include 1953 through October of this year.

In general, since President Dwight D. Eisenhower took office in 1953, the economy – as measured by gross domestic product, unemployment, inflation and recessions – has typically performed better with a Democrat in the White House. GDP growth has been significantly higher; inflation – a measure of the change in prices – has been lower; and unemployment has tended to fall.

The stock market tends to perform better with a Democratic president, rising 11% per year on average compared to 6.8% for Republicans. Despite his claims to the contrary, the stock market’s performance under President Donald Trump has been about average.

Perhaps the most striking difference I found is in the number of months the economy was in recession, as determined by the National Bureau of Economic Research. From 1953 to 2016, Republicans controlled the White House for 432 months, about 23% of which were spent in recession. Democratic presidents held the reins for 336 months in that period, just 4% of which were in recession. The 2020 recession began in March has not been officially declared over.

One suggested explanation for this dramatic difference is that deregulation implemented during Republican administrations leads to financial crises, which in turn cause recessions. Another is that factors a president does not have any control over, like a sudden increase in oil prices, are the usual causes of recessions. Others suggest that the economy’s better performance under Democrats is simply due to luck.

So even though voters tend to think Republicans do a better job steering the economy, historical data shows otherwise. Whether Biden continues that streak, of course, remains to be seen, especially given he’ll likely have a Republican-controlled Senate, which could frustrate his policy initiatives.

A silver lining in divided government

In my analysis, I also examined the impact of Congress and how having all, part or none of the legislative branch controlled by the president’s party affected the economy’s performance.

Interestingly, the U.S. has not seen Democrats in control of the White House and the House of Representatives with Republicans in charge of the Senate since 1889, when Grover Cleveland was president. So my dataset, going back to 1953, doesn’t shed any light on this particular legislative configuration.

However, I did find that the economy did pretty well when a Democratic president faces either one or both houses of Congress controlled by the opposition. During the 144 months when one of those conditions were true, the U.S. was never in recession. And when Republicans controlled Congress under a Democratic president, average monthly unemployment was the lowest of any condition, at 4.85%.

Of course, this doesn’t mean a divided government will lead to good results today. A pessimistic take is that there will be gridlock, and nothing will get done. In order to pass and sustain major initiatives, bipartisanship will be needed.

There’s an off chance that Democrats take control of the Senate if two runoff elections scheduled for January in Georgia both fall into the Democrats’ column. Historically, such a Democratic trifecta existed for 192 months, 14 of which – 7% – were in recession.

History also has a lot to say about recovering from an economic collapse, which keeps taking longer.

For example, it took only 11 months for the job market to recover from the 1980 recession, but 77 to recover the jobs lost in the Great Recession that lasted from 2007 to 2009. If this trend continues, it could be 2027 or later before the job market fully recovers from the pandemic-induced recession.

But the past doesn’t predict the future, and I believe the policies a president pursues and is able to implement still matter.

During the campaign, Biden proposed several ambitious spending plans, such as “build back better,” which would invest in American infrastructure and clean energy, as well as “buy American.” In all, Biden has proposed US$2 trillion to $4.2 trillion of additional measures to fight the pandemic’s economic effects, according to an analysis by the nonpartisan Committee for a Responsible Budget.

His economic plan cannot be implemented without the cooperation of Congress. Investment in infrastructure has historically had bipartisan support so Biden and Senate Majority Leader Mitch McConnell may find some common ground there. But although McConnell has indicated fiscal relief will be a top priority, he has opposed another large coronavirus bill.

It’s impossible to predict whether Republicans will choose bipartisanship or obstructionism, but I remain hopeful – given Biden’s history of moderation – that the new president and Congress will do what is needed to move the economy forward.