Is It Unethical to Give Your Cat Catnip? 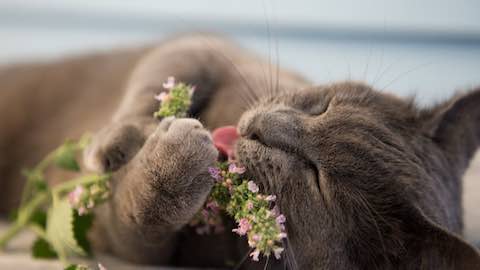 Catnip can induce changes in cat behavior. An expert argues that giving it to cats raises questions about human power and animal autonomy.

Many of the go-to items for cats contain catnip.

This herb, which goes by the botanical name of Nepeta cataria, induces changes in cat behavior. In my view, it's worth considering whether giving a mood-altering substance to a pet is ethical.

Catnip is sold in small packets and toys as well as in highly concentrated forms such as oils and sprays. The concentrated forms are different from its availability in nature. If a cat were to encounter catnip in the wild, it would be in the form of leafy greens growing on plants, not concentrated.

Not all cats are affected by the drug, but for some it can have a five- to 15-minute marijuana- kind of effect.

About 30 percent do not respond at all -- which means 70 percent do -- and it doesn't have an impact on kittens until they are about 6 months old, the time they attain sexual maturity.

When under the influence, some cats roll around, salivate, and at times, fight with other cats. It is not clear if there are any medicinal benefits. Cat owners often laugh at this behavior of their feline friends as being “high.”

As an animal media studies scholar, I argue laughing at a cat who has been given a drug even if they seem happy should raise questions about human power and animal autonomy.

Several philosophers have made an argument for giving the same moral consideration to animals as we would give to humans. Philosopher Jan Narveson, for example, asked in context of eating meat, whether animals suffer and if that was sufficient reason not to eat them.

One animal ethics theory denies moral standing to other animals, stating they lack characteristics that only humans are thought to possess, such as rationality, autonomy and consciousness. But another theory of moral equality argues that there are parallels in mental capabilities between humans and other animals and that moral consideration should not be limited to only our own species.

Philosopher Peter Singer, calls for “equal consideration of interests.” Singer argues that we should not use our species as a measure of the worth or abilities of others, or their worthiness of ethical consideration. Other philosophers too have argued that simply because dogs or other animals don't have the same vocal structure as humans doesn't mean they should be treated with less compassion.

Furthermore, humans share many traits -- empathy, ability to communicate, eating habits, sociability -- with other species. For example, the capacity to love one's young, the need to have food, water and to spend time with others of one's own species are not exclusively human traits. According to philosopher Julia Tanner, “It would be arbitrary to deny animals with similar capacities a similar level of moral consideration.”

So, if is unethical to drug a child and to laugh at how he or she responds, should we unthinkingly do the same with our cats?

The discussion on whether giving catnip is ethical has been an ongoing one on social media and other websites.

On Reddit, for example, one person commented, “think of it as your cat going out for a few beers after work.” To that, another reader from an Alcoholics Anonymous family responded, asked whether it was ethical to give someone a drug in an otherwise substance-free home.

I asked the nonprofit People for the Ethical Treatment of Animals where they stand on this issue. Media Officer Sophia Charchuk responded:

“PETA is all for treating cat companions to reasonable amounts of high-quality catnip -- and for keeping them indoors, where they'll be safe from cars, contagious diseases, predators, and cruel humans and able to enjoy toys (including those filled with catnip) for years to come.”

However, my point here is not only about whether cats feel pleasure or pain. It's about taking responsibility for our actions towards our pets and giving them the same moral consideration as we do to humans.

We rarely notice how advertising, television programs, movies and photographs often present a one-dimensional view of animals using them to say something about us, but very little about them. Wolves, for example, are widely shown in advertising and film as intent solely on harming us, rather than the complex, multidimensional pack animals that they are.

This has an impact on how we view animals. I agree with scholars who have pointed out that we need to view animals as subjects of their own lives rather than objects in ours. I believe we need to reconsider the ethics of “catnipping” them.

Article: Republished from The Conversation.

Is Giving Your Cat Catnip Unethical?