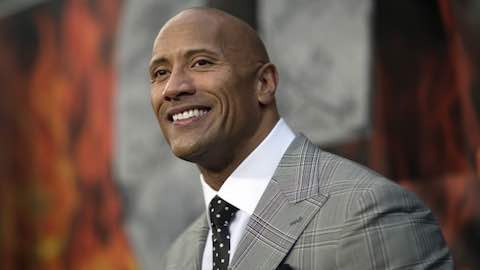 Wrestler-turned-actor Dwayne Johnson topped a Forbes magazine list of the world's highest paid actors with an estimated 2016 payday of $64.5 million.

Wrestler-turned-actor Dwayne Johnson topped a Forbes magazine list of the world's highest paid actors with an estimated 2016 payday of $64.5 million.

Johnson, 44, knocked Robert Downey Jr. off the top spot and more than doubled his 2015 earnings, largely thanks to his action comedy "Central Intelligence." Johnson, known as "The Rock" during his wrestling career, also collected advance fees from the eighth installment of the popular "Fast and Furious" racing movie franchise.

The Forbes annual list again highlighted the pay gap between men and women in Hollywood.

Jackie Chan, who has not had a big U.S. box office hit for years but is a prolific actor and producer in the burgeoning Chinese entertainment market, was second on the list with $61 million. Matt Damon came in third with $55 million, largely due to the success of his 2015 space film "The Martian."

Harrison Ford crept onto the list for the first time since 2009 thanks to his return as Han Solo in the blockbuster new "Star Wars: The Force Awakens" movie and video game. Ford, who also is to reprise his role as adventurer Indiana Jones in 2019, ranked 20th with earnings of about $15 million.