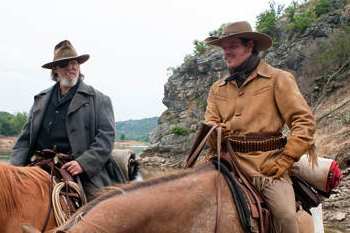 The new "True Grit" restores all the grit removed in the first version (the 1969 Henry Hathaway film starring John Wayne) of the 1968 Charles Portis novel.

All of Portis' sardonic wit has been retained this time, and then some. The "then some" derives from this project's writers, directors and editors, all of whom are Joel and Ethan Coen, who edit under a pseudonym and who have been making Westerns (of variously disguised sorts), film noir riffs and revenge tragicomedies their entire adult filmmaking lives.

Though this is a wintertime story, set in the 1870s, we're quite close visually to the world of "No Country for Old Men," the movie that handed the Coens their second Oscar (the first was for the "Fargo" script). The tale is set in Arkansas and what was then known as the Indian Territory (later, Oklahoma); the Coens and their crack cinematographer, Roger Deakins, shot "True Grit" in New Mexico and West Texas, where they photographed "No Country."

The biggest change from the '69 "True Grit" is the best thing about this formidably well-crafted picture. Portis's narrator and heroine, 14-year-old Mattie Ross, runs the show this time, not the one-eyed marshal. Her flinty, Old Testament eye-for-an-eye search for her father's killer guides the story every inch of the way.

A droll Jeff Bridges, as the Confederate Civil War veteran and U.S. Marshal Rooster Cogburn, keeps his voice far, far back in his throat, back where the whiskey and gravel resides. In a distinct uptick from the '69 version, Matt Damon plays the self-appointed dandy of a , LeBoeuf, in a more confident vein (though the Coens push this character all the way into Caricature Territory) than Glen Campbell was able to manage.

More importantly, though, Hailee Steinfeld is a real find as Mattie. When Kim Darby played her in '69, the actress was already in her early 20s; Steinfeld is still a teenager, in addition to being an appealing presence and a fine stoical observer to her character's fortunes. Though third-billed, Josh Brolin has little screen time as the scoundrel they're after; Barry Pepper (as Lucky Ned) is no less scary as one of the killer's compadres.

The results? Good. Not great. Throughout "True Grit" (and this isn't the first time anyone's wondered this about a Coen brothers' film) you're engaged in a guessing game regarding how seriously to take what happens, or how seriously the Coens are taking it. They love Portis's language, that much is clear, and they've hired clever, full-bodied actors who can mine that fancy 19th century verbal embroidery for all its dark comic value. Near the end, I think the movie transcends its limitations, when we learn of Mattie's fate. The tableaus and graceful, mournful transitions we see, taking us from the narrator's childhood to middle age, from one century to the next, are as fine a series of images as these filmmakers have created. There is a sad undertow, which the novel had, as well as plenty of surface wit, also from the novel. It's a better film version in all respects than the previous "True Grit."

And it feels more like an assignment fulfilled than a passion pursued. But craft this strong -- and, despite the tonal uncertainty, true -- should not be taken for granted.

Credits: Written and directed by Joel and Ethan Coen, based on the novel by Charles Portis; produced by Scott Rudin, Ethan Coen and Joel Coen. A release.