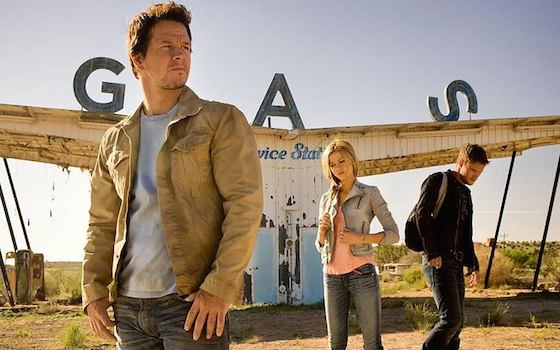 "Transformers: Age of Extinction," the fourth installment of Michael Bay's $2.6-billion blue-chip franchise about a race of super robot freedom fighters that wear codpieces (to hide the junk under their trunk) and appear fundamentally incapable of not banging into stuff (even when these things are in an open field they find the one barn or tractor for miles around to collide with), is an aggressively charmless act of digital confetti.

It is scattered, weightless, impossible to get hold of, and somehow, after seven years and more than 10 hours of screen time, I could not tell you what these films are about. Explosions? Real estate? Let's say: "Transformers: Age of Extinction" is 165 minutes, 11 minutes longer than the next longest installment ("Transformers: Dark of the Moon"), 10 minutes shorter than that piece of trash "The Godfather."

Even more so than skyscrapers losing sheets of windows, and a pounding cacophonous insistence that doesn't even make the "Transformers" series all that fun to hate -- really, no one is a bigger supporter of gigantic robots than myself -- time seems to be the defining characteristic here. For several reasons: These films, particularly "Age of Extinction," manage to come off as rushed, long and empty, all at once. Also, Bay's franchise, which can be fascinatingly contradictory, jingoistic and paranoid, xenophobic and worldly, has the air of a time capsule, of our frenetic, eager, air-kissy, confused techno-ubiquitous age. But even more so, the "Transformers" films are about reminding you that time, which stops while you are in a theater watching one, is relative, and whether you follow along or not, there will be more Transformers movies coming.

Transformers will bury us.

It's no spoiler to point out, for instance, that this chapter ends with Optimus Prime, long-winded leader of the nice robots (these things all pontificate the way you imagine a Civil War memorial might sound), soaring into space to continue the fight with someone or thing not especially obvious but apparently extremely important. Whatever franchise-extending, plot-establishing mythologizing goes on in a "Transformers" movie tends to be an afterthought. In fact, in mid-soar, Optimus waxes philosophical: There are mysteries of the universe, and things unexplained. Oh, I get it: You are not supposed to understand what is happening in a "Transformers" movie, only that it is happening. So, when Stanley Tucci, as a Steve Jobs-like billionaire building an army of bad Transformers that improve on legit Transformers, says he thinks he should have enough Transformer stuff -- "transformium," I guess it's called (seriously) -- to last the next 100 years, the actor smirks ever so slightly.

But also kind of sweet, one of a few moments when you feel Michael Bay -- who never can get a break from critics, and whose films are distinctively, chaotically, admirably his own -- has a caustic sense of humor. Midway though "Age of Extinction" I realized I didn't know what was actually at stake. Extinction? I didn't know who was being chased by whom, or who any of these people were, so I looked to Mark Wahlberg's face for answers, and laughed (too loudly): I realized Bay was playing a joke. By returning Wahlberg to his old pre-Oscar nomination face -- the expression of a man waiting for someone to finish talking -- he wastes the actor but lands his Tippi Hedren, his place holder, more or less.

Because Bay, not so unlike Alfred Hitchcock, seems to have more allegiance to inserting a handful of familiar elements -- leveled cities, unnecessary car chases, American flags, martial arts, slo-mo stunts, trench coats -- than actors, or people. These Transformers protest a little too pointedly when they repeatedly ask: "Why should we care for these humans?" Indeed, "Age of Extinction" begins with the dinosaurs. They are quickly killed. Then the movie goes to the Arctic where robot dinosaurs are discovered (cool and given too little screen time). Then it goes to Texas -- aka"Texas USA," as a title informs -- where we find Texan Wahlberg, a nutty inventor type (I know, I don't see it either) about to lose the family farm. Shia LaBeouf, who starred in the first three films, is nowhere to be found because his star power declined, and the actor is never mentioned, so the Transformers, being kind of slutty, shack up with Wahlberg, who finds Optimus (disguised as a truck) in an old movie theater (actually, the shuttered Uptown Theatre on Broadway). Optimus goes home with Wahlberg and explains that since the "Battle of Chicago" (that part in "Dark of the Moon" when you went deaf), good Transformers have been hunted by a rogue FBI (headed by a pretty good Kelsey Grammer). The president, we learn, is naive about the perceived threat of Transformers, and Grammer's character wants to vanquish robot immigrants. And sell their parts to Tucci.

Except, oh, there's a bad robot who collects Transformers and wants, no kidding, to spread his "seed" around, which I think means extinction, or in the hands of Bay, could be very different. I really don't know.

Also, demolition: Lots of it.

Chicago, having been leveled in the third film, is merely smashed this time. China, which offers a burgeoning opportunity for Hollywood, is banged around in the film's final third. In particular, Hong Kong is totaled, while mainland China, making a few contractually obligated appearances (the film has Chinese co-financiers and was allowed extensive shooting privileges), shows up primarily so that the bureaucratic authority figures can remind Chinese audiences ("Scramble the jets") its central government will stand up to a Transformer threat.

Anyway, if you've seen a "Transformers" film, you know this one: Intended to relaunch the series with a new star and revitalized purpose -- the shadowy FBI storyline, apparently -- Bay is the real star again: As in his older blockbusters ("Armageddon," the "Bad Boys" franchise), one's eyes never get a moment to relax. Sunsets grow oppressive. I'm reminded of video games with similar visuals minus the visceral rush. ("Titanfall" for Xbox, one of 2014's best games, stars big robots, and is as graceful as "Extinction" is dull.)

None of which should surprise, of course.

What's disappointing is the lack of confidence.

It's Bay's world -- every professional female is British, every building could be every other building -- but he's uneasy, never relaxed enough to own the film's ridiculousness. Instead, characters quip: "You keep spending money on junk to make different junk," and "Out of ammo, out of ideas." And an air of self-hatred, or disinterest, settles in. Even as the loud maw of the film itself reduces even the most astonishing visuals to wallpaper, these characters talk so often about robot soul that "Transformers: Age of Extinction" commits the worse crime imaginable: It's totally boring.

About "Transformers: Age of Extinction"

As humanity picks up the pieces, following the conclusion of "Transformers: Dark of the Moon," Autobots and Decepticons have all but vanished from the face of the planet.

However, a group of powerful, ingenious businessman and scientists attempt to learn from past Transformer incursions and push the boundaries of technology beyond what they can control - all while an ancient, powerful Transformer menace sets Earth in his cross-hairs.

Can Optimus Prime and the Autobots rise to meet their most fearsome challenge yet?