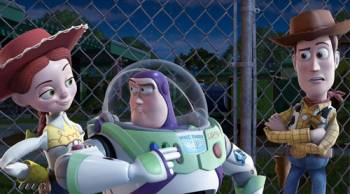 If "Toy Story 3" had sprung, Slinky Dog-like, from any creative think tank besides Pixar Animation Studios, it might be considered a classic.

As is, it's a good sequel to the 1999 "Toy Story 2" and the 1995 original. After a rather shrill and conventional first half, more in the DreamWorks style, it recaptures the old comic spark with a splendid ode to "The Great Escape" as cowboy Woody, spaceman Buzz Lightyear, cowgirl Jessie, Mr. and Mrs. Potato Head and the rest of the principals bust out of the plastic-and-plush-toy gulag in which they find themselves.

Make no mistake: This Disney/Pixar release represents a franchise taken seriously by its custodians. The guiding notion of the story picks up on a theme from "Toy Story 2," that of the existential conundrums faced by toys who know why they're here (to please their owner), but who must worry about the bigger questions of life, death and self-awareness, just as humans do.

Young Andy, now 17, has long since sidelined his old pals. He's heading off to college, and the long-neglected toys are headed for the attic. Mistakenly, they're bagged and thrown to the curb as trash; screenwriter Michael Arndt ("Little Miss Sunshine") belabors the complications that ultimately reroute the gang (minus Woody) to a day care center run by a grandfatherly plush-toy patriarch, a bear named Lotso (voiced by Ned Beatty), who welcomes the newcomers with open arms.

What they find there is horror, in the form of toddlers on a rampage. The film itself, directed (as was "Toy Story 2") by Pixar veteran Lee Unkrich, offers its share of sheer terror as well. The perils, some more inventive than others, culminate in a fiery near-death experience for the ensemble (like the end of "Titanic" with flames instead of water), a sequence that may send very young viewers straight into therapy. Then again, I thought "The Lion King" (Disney, not Pixar) was too much for young kids, as well.

I come to "Toy Story 3" admiring the first two a great deal, without quite cherishing either of them. Many millions, of course, do cherish them. For me, it's partly because the pictorial style of this series' computer animation strikes me as antiseptic. Compared with the riches of all kinds in recent Pixar masterworks such as "Ratatouille," "Wall·E" and "Up," "Toy Story 3" looks and plays like an exceptionally slick and confident product, as opposed to a magical blend of commerce and popular art.

But the story finds itself around midpoint, and by the end its combination of thrills and sentiment defies resistance. Tom Hanks, Tim Allen, Joan Cusack, Wallace Shawn, Don Rickles and the others return for some choice vocal characterizations. My favorite newcomers include the Chatter Telephone, who serves an important communication function late in the game. In addition to Beatty's cuddly bear (inspired casting, even if the role itself deserved sharper writing), Michael Keaton is most welcome as the voice of Barbie's petroleum-based soul mate, Ken, whose yen for fashion goes to infinity and beyond.

The Pixar folks, some of them at least, clearly are ambivalent about the 3-D craze. Do you need to see "Toy Story 3" in 3-D? Not really. The film's visual universe offers some of the things 3-D does best (flying sequences, for one) but the filmmakers don't over-rely on the usual show-offy stuff designed to justify the 3-D admission markup.

Though uneven and less witty than the first two, "Toy Story 3" delivers quite enough in two dimensions. And there's a lovely coda, in effect a curtain call for the characters we know so well.

The creators of the beloved Toy Story films re-open the toy box and bring moviegoers back to the delightful world of Woody, Buzz and our favorite gang of toy characters in TOY STORY 3. Woody and Buzz had accepted that their owner Andy would grow up someday, but what happens when that day arrives?