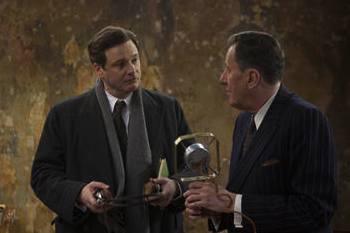 "The King's Speech" reminds us that although everything can go wrong with a film before it gets to the casting stage, and often does, a couple of marvelous performances can elevate solid, well-carpentered material and make it something special.

The juicy, witty historical docudrama "The King's Speech" stars Colin Firth as Bertie, the future King George VI, and Geoffrey Rush as his "speech defects" consultant, an Australian living in London by the name of Lionel Logue.

The actors, predictably, are superb in roles shaped by screenwriter David Seidler, and directed by Tom Hooper. Yet they are unpredictably superb as well.

Naturally ebullient and sometimes shamelessly scene-stealing, Rush has never given a more contained or moving screen performance. Partly it's a response to the director's visual strategy: Hooper keeps his slightly distorting fish-eye-lens very close to his subjects, high-born as well as common.

To some, this lends the picture a gratifying, un-stuffy immediacy; to others, it'll just seem odd. Either way, from that intimate camera-to-actor perspective the tiniest lift of an eyebrow registers very, very clearly.

Firth, by contrast, is by performance temperament a minimalist, and surely he is comfortable slipping into the skin of a fundamentally shy human being. Because his character labors, mightily, with the burden of a severe stammer, his role entails considerable technical challenges. How much to recreate the stutter? How little? In what ways does an actor suggest not only the moment-to-moment agonies of speech, but also the gradual, inspiring improvement under Logue's unconventional tutelage?

Seidler, himself a lifelong stutterer, began "The King's Speech" as a play, and many of the most effective scenes retain a simple theatrical dynamic, one character playing a metaphorical tennis match against the other. Firth is exceptional at capturing the future king's imperious yet melancholy air, the underachiever waiting to be prodded into something more. The surprise, both in the writing and the performing, is how deftly we learn of the factors contributing to the stammer. No clunky flashbacks; little sentimentality.

Firth and Rush are surrounded by a first-rate ensemble, chiefly Helena Bonham Carter as a warm-hearted Elizabeth, wife of King George VI; Michael Gambon, fearsome as George V, a man to whom it would never occur that "Get it out, boy!" does not work with stutterers; Guy Pearce, dashing yet slightly pathetic as the king who had the bad luck to fall for a Baltimore divorcee; and Jennifer Ehle, glancingly comic as Logue's wife, who cannot quite fathom why her husband's waiting room is taken up with English royalty.

Some aspects of the film feel routine, or facile, or too heavily underlined. Certain performers (Timothy Spall as Winston Churchill most glaringly) fly straight past character into caricature. I suppose there's a kind of "Educating Bertie" quality to "The King's Speech." But I refer once again to the actors at the center. Watching Firth, in particular, create a mass of empathetic connections and paradoxes in the service of a fully rounded portrayal ... well, this is why "The King's Speech" transcends the ordinary, even the ordinary within its own framework. And it's why Firth will likely add an Academy Award to all the other prizes he's won, and deserved.

MPAA rating: R (for some language).