The Kids Are All Right (4 Stars) 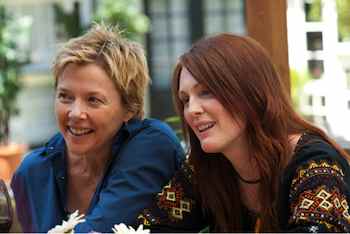 "All right" doesn't begin to describe it. "The Kids Are All Right" is wonderful. Here is a film that respects and enjoys all of its characters, the give-and-take and recklessness and wisdom of any functioning family unit, conventional or un-. The independently financed $5 million indie, picked up for distribution by , is the easiest movie to love I've seen all year.

In writer-director Lisa Cholodenko's previous theatrical releases, the New York-set "High Art" and the Los Angeles-set "Laurel Canyon," the filmmaker proved adept at examining relationships from close quarters. She's especially shrewd at delineating how a vulnerable soul can be pulled into undiscovered country, perilous and exciting. Every action or transgression comes with a price, however, and that's why Cholodenko is so good; she sees the reasons behind everyone's behavior. Her films are well-made in a straightforward, humanistic vein, yet emotionally expansive and open-ended, like all good fiction.

This holds especially true in "The Kids Are All Right," which is set in the sunny hillsides of LA and was co-written by Cholodenko and Stuart Blumberg. Already it has become known as the "lesbian moms film" or the "sperm donor dad movie," both of which are true, if reductive. Doctor Nic (Annette Bening) and her longtime partner, Jules (Julianne Moore), have two teenagers from the same sperm donor. Daughter Joni (Mia Wasikowska), heading off to college, is leaving behind a younger brother, Laser (Josh Hutcherson), who has grown curious about the identity of their father.

Contact is made, behind the moms' backs, and in a charmingly awkward scene, Mark Ruffalo's restaurateur Paul -- an easygoing SoCal satyr, open to any new experience -- says he'd be willing to have some sort of relationship, or friendship, with these two. From there, the narrative offers an equal number of satisfying inevitables and gratifying surprises. The Bening character, a hard-drinking, somewhat fearsome control freak, doesn't like the idea of this man entering their lives. Moore's character, a fledgling landscape gardener who's hired to transform Paul's canyon hillside into something more than untended scrub, sees him differently, more forgivingly. She's also intrigued by this boy-man in his 40s who seems to live in a seductive fog of availability.

Shot on pleasantly hazy 35 mm by cinematographer Igor Jadue-Lillo, Cholodenko's film is conversational without being stagey. Bening and Moore have never been looser or wittier on screen, and Ruffalo is the perfect foil, a man who enjoys a romantic challenge as much as a sure thing. Wasikowska and Hutcherson are two of the truest, most direct young screen actors working today. Like Kenneth Lonergan's "You Can Count on Me" a decade ago, which also co-starred Ruffalo, "The Kids Are All Right" is a triumph of simple technique wedded to complex and satisfying comedy-drama.

An LA friend came out of Lonergan's film saying, "I love it, and I can't even tell you why, exactly." I suspect Cholodenko's achievement will elicit similar responses among all kinds of moviegoers.

MPAA rating: R (for strong sexual content, nudity, language and some teen drug and alcohol use).