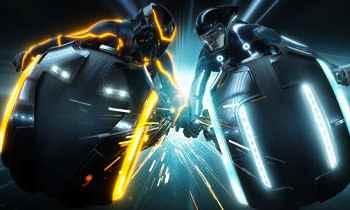 Imagine being "trapped ... inside an electronic arena!" This is how the coming-attractions trailer for the original "Tron" sold the goods back in 1982. Now comes Disney's remake of its cult property, fancied up with 3-D and the high-minded title, "TRON: Legacy."

The results impart that "trapped" feeling all too well. It's a sullen affair, dominated by a grim visual palette that intrigues for about 30 minutes.

Thereafter I found myself wishing I could switch over to different, peppier 1982-derived artifact, something on the order of "Pole Position."

The movie does begin promisingly.

I saw the 3-D version of "TRON: Legacy," and in that version the black-light-style Magic Kingdom corporate logo alone looks groovier than any of the 3-D in Disney's recent smash, "Alice in Wonderland."

The early sequences do nicely with establishing 27-year-old Sam Flynn's entry into his missing father's universe, the innards of a digital grid. There, as it was in the '82 version, the games are deadly, like variations on "Rollerball" played inside a laser-tag emporium. The remake, like the original, stars Jeff Bridges as the computer visionary Kevin Flynn, now older, with a beard, still spouting the "like, man" Zen bits of wisdom and the notion that information should be "free and open." A digitally futzed Bridges also plays Clu, Flynn's self-created alter ego, manipulated so that he appears not to have aged since the first "Tron" opened to disappointing box office returns.

This is one of those big-budget projects destined to split audiences (a good thing, always). Directed by Joseph Kosinski, who did the "Halo" and "Gears of War" commercials, "TRON: Legacy" comes to life when Sam, played by a too-cool-for-school Garrett Hedlund, learns the ways of the Lightcycles and the perilous joys of racing on "ribbons of light." Here, we get the sweep and simple excitement we need. Elsewhere, we get exposition more sluggish than the stuff we had to wade through in the second and third "Matrix" movies, and a strained, opaque brand of intellectual-property mythology that might mean tons to ardent fans of the first "Tron," but less to others.

I did enjoy the camp turn from Michael Sheen, though. He plays a sinister chap who runs a stylishly low cocktail lounge inside the grid, and who refers to our inexpressive young hero as a "pretty miss," swanning around like Annie Lennox lost in space. Egregious stereotype? Probably. But by the time Clu amassed his army and the showdown showed up, I was surprised how much I missed him.