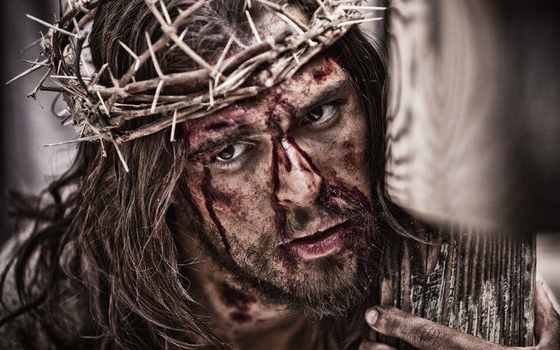 Diogo Morgado as Jesus Christ in 'Son of God'

Blame Mel Gibson if you like, but no Jesus movie these days is worth its salt without an utterly unflinching treatment of his Crucifixion. But 'Son of God,' a big-screen version of the History Channel series 'The Bible,' has a redemptive optimism about it.

Blame for it if you like, but no Jesus movie these days is worth its salt without an utterly unflinching treatment of his torture and Crucifixion. And "Son of God" has stretches when the agony we watch this poor man endure is avert-your-eyes awful. If history ever produced a more excruciating form of punishment, it probably included lions at dinner time.

But "Son of God," a big-screen version of and History Channel TV series "The Bible," has a redemptive optimism about it that makes the brutality go down easier.

Their Jesus may be all business. But he sports a beatific smile as he renders unto audiences lines that feel like rough drafts of the polished poetry of the King James Bible.

"I'll give my stone to the first man who tells me he has not sinned" doesn't have the memorable ring of "Let he who is without sin cast the first stone."

It's a standard-issue Christ picture -- hitting the high points from Jesus () taking that first fishing trip with Peter () to Lazarus to "Where's Judas?" to "Give us Barabbas" and the long, final walk.

Unlike "The Passion of the Christ," there's no Aramaic with English subtitles, a lot less blood and no anti-Semitism. No character feels like a caricature -- not the hypocritical Pharisee Caiaphas () or the gruff and dismissive Pontius Pilate ( of "Snow White and the Huntsman"). But it's also dramatically flat, with few actors who make an impression as they play saints and sinners, the icons of the Bible.

An eight-minute prologue takes us from Eve and Adam through Noah and Abraham to the biblical "present," in which the apostle John () narrates the story -- from recruiting Peter to the miracle of fishes and loaves (unleavened pita bread here), from tackling the money changers in the temple to the Sermon on the Mount.

The settings are passable versions of ancient Israel -- digital models of Jerusalem, here and there, in the middle of the arid, rock-strewn landscape.

Among the cast, Hicks and Shaw make the strongest impressions, with co-producer Downey ("Touched by an Angel") managing a perfectly weepy Mother Mary.

And while Morgado's Jesus suggests little of the charisma of this first "fisher of men," it is a pleasantly retro, "hippies will inherit the Earth" take on the man. The film emphasizes his role as rabbi or "teacher," and his big lessons about forgiveness, humility, compassion for the poor and wariness of the wealthy. Morgado's Portuguese accent makes him stand out from the often Brit-accented apostles, Pharisees and Romans.

Like the much-criticized TV series it is culled from, the film's main aim is to be inoffensive, and with multiple directors and screenwriters, they at least manage that. Parts of the story emphasized by the (the redemption of Dismas, on the cross next to Christ) and that inspired "Raiders of the Lost Ark" (the spear of Longinus delivers the coup de grace) are touched on.

And unlike Gibson's bloody blockbuster, this loving, forgiving son comes back long enough to remind us of why the religion, founded in his name, has endured.

MPAA rating: PG-13 (for intense and bloody depiction of the Crucifixion, and for some sequences of violence)

About "Son of God"

"Son of God" is a documentary style film about faith. The life story of Jesus is told from his humble birth through his teachings, crucifixion, ultimate resurrection, and the powerful story that goes along with it.

Diogo Morgado, who is an Oscar winner, plays Jesus.