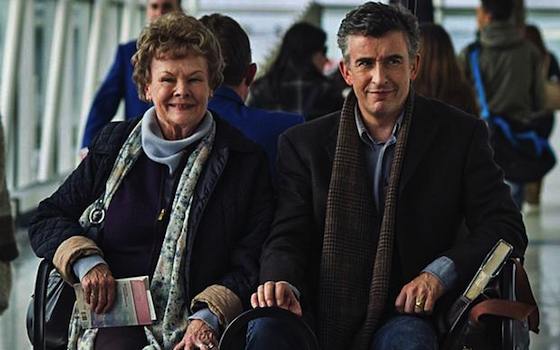 elevates everything she does, from M in the James Bond epics to the less intimidating but equally determined "little old Irish lady" who's the title character in "Philomena."

Dench is not the only reason to see this unapologetic crowd-pleaser, but she is the best one.

As directed by the veteran , "Philomena's" "inspired by true events" narrative initially has trouble deciding what kind of film it wants to be, alternating between cheeky comedy and the more serious emotional moments inherent in the story of a woman looking for a child she was forced to give away in adoption.

Though it ends up the least involving part of the film, "Philomena" does come by its comedy honestly.

Co-star , one of top comics, is not only Dench's co-star, he is also one of the film's producers (and co-writer with ), and his presence mandated a certain amount of mostly indifferent humor that gets the film off to an unsteady start.

But as "Philomena" gets deeper into its involving plot, it seems to gain confidence in the strength of its narrative and accepts the fact that telling a dramatic story is job one.

A good part of the credit goes to Dench's performance as Philomena Lee -- Phil for short, a retired nurse with quite a story to tell.

It is the genius of the actress's work that by bringing an instinctive dignity to her characterization, she creates someone who is simultaneously average and extraordinary.

It was co-writer Coogan who discovered the film's narrative lurking behind an incendiary headline in the Manchester Guardian: "The Catholic Church Sold My Child." That led him to a nonfiction book by that told Philomena's story in detail.

"Philomena" begins with Sixsmith's predicament: Formerly a foreign correspondent, he was employed as director of communications for government when something he did got him fired.

Desperate for something to do, he is approached by Philomena's daughter, Jane (), about her mother's story, but Sixsmith is initially dismissive. He considers human interest stories to be journalism written about and for "weak-minded, ignorant people." Full stop.

That's a problem because this humanizing of a cynical, emotionally disconnected twit into someone who recognizes the wisdom in a person of the lower classes is as much of a cliche as it sounds. "Philomena" does get some mileage out of specifically British class references -- there are jokes about -- but Sixsmith never rises above the level of dramatic construct, while Philomena becomes meaningful and real.

The reason for that, aside from Dench's acting, is the strength of her story.

Finding herself pregnant and out of wedlock as an Irish teenager in 1952, Philomena is handed over to the nuns at the Sacred Heart Convent in Roscrea.

These nuns, especially the hard-core Sister Hildegarde (played young by and old by ), really crack the whip. Philomena, wracked by guilt as she is, does daily back-breaking work in the laundry and is allowed to see her young son only one hour a day. She is coerced into letting her son be given away for adoption, something that haunts her for a full half-century until she confesses to daughter Jane what happened and starts on the journey to find him.

That story is the heart of "Philomena" and, fortunately, it is a truly surprising one. "Philomena's" setup does feel conventional, but Dench makes the resolution worth waiting for.

"Philomena" is a drama about a mother and her son. Judi Dench stars in the film. It is about a young woman that gave her son up for adoption when she had him out of wedlock. Years later after having a family, the now older woman looks for her son with the help of a reporter. What will she find?