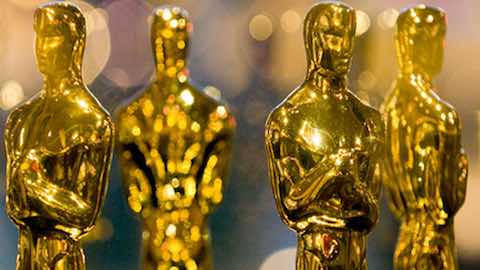 The most recognized trophy in the world, the Oscar Statuette has stood on the mantels of the greatest filmmakers in history since 1929.

Shortly after the formation of the Academy of Motion Picture Arts and Sciences in 1927, the fledgling organization held a dinner in the Crystal Ballroom of the Biltmore Hotel in downtown Los Angeles to set out its goals. Among the topics discussed that night was how best to honor outstanding moviemaking achievements and thereby encourage excellence in all facets of motion picture production.

Agreeing to institute an annual award, the group turned its attention to creating a suitably majestic trophy. MGM art director Cedric Gibbons designed a statuette of a knight standing on a reel of film gripping a crusader's sword. The Academy tapped Los Angeles sculptor George Stanley to realize the design in three dimensions -- and the world-renowned statuette was born.

Since the initial awards banquet on May 16, 1929, in the Hollywood Roosevelt Hotel's Blossom Room, 3,048 statuettes have been presented. Each January, additional new golden statuettes are cast by Polich Tallix fine art foundry in New York's Hudson Valley.

Oscar stands 13.5 inches tall and weighs in at a robust 8½ pounds. The film reel features five spokes, signifying the five original branches of the Academy: actors, directors, producers, technicians and writers. Although the statuette remains true to its original design, the size of the base varied until 1945, when the current standard was adopted.

Officially named the Academy Award of Merit, the statuette is better known by its nickname, Oscar. While the origins of the moniker aren't clear, a popular story has it that upon seeing the trophy for the first time, Academy librarian (and eventual executive director) Margaret Herrick remarked that it resembled her Uncle Oscar. The Academy didn't adopt the nickname officially until 1939, but it was widely known enough by 1934 that Hollywood columnist Sidney Skolsky used it in a piece referring to Katharine Hepburn's first Best Actress win.

The Oscar statuettes are solid bronze and plated in 24-karat gold. Due to a metal shortage during World War II, Oscars were made of painted plaster for three years. Following the war, the Academy invited recipients to redeem the plaster figures for gold-plated metal ones.

Achievements in up to 25 regular categories will be honored on February 26, 2017, at the 89th Academy Awards presentation at the Dolby Theatre at Hollywood & Highland Center. However, the Academy won't know how many statuettes it will hand out until the envelopes are opened on Oscar Night. Although the number of categories are known in advance, the possibility of ties and of multiple recipients sharing the prize in some categories makes it impossible to predict the exact number of statuettes to be awarded. As in previous years, any surplus awards will be housed in the Academy's vault until next year's event.

More than 80 years after that auspicious gathering in Hollywood, Oscar's success as a symbol of filmmaking achievement would probably amaze those who attended the dinner, as it would its designer, Cedric Gibbons.

First Recipient: Emil Jannings, named Best Actor for his performances in "The Last Command" and "The Way of All Flesh" in 1929

Design: A stylized figure of a knight holding a crusader's sword standing on a reel of film with five spokes signifying the five original branches of the Academy (actors, directors, producers, technicians and writers). No model was used during the design process.

Movies & Movie Reviews: History of the Academy Awards and Oscars