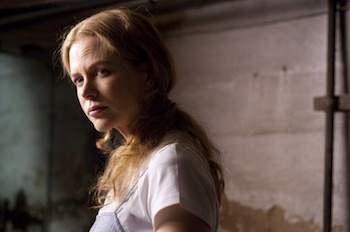 Nicole Kidman first came to the attention of American audiences with her critically acclaimed performance in Phillip Noyce's riveting 1989 psychological thriller Dead Calm. She has since become an internationally-recognized, award-winning actress known for her range and versatility.

In 2003, Kidman won an Academy Award, a Golden Globe Award, a BAFTA Award and a Berlin Silver Bear for her portrayal of Virginia Woolf in Stephen Daldry's The Hours.

In 2002, she was honored with her first Oscar nomination for her performance in Baz Luhrmann's innovative musical, Moulin Rouge! For that role, and her performance in writer/director Alejandro Amenabar's psychological thriller, The Others, she received dual 2002 Golden Globe nominations, winning for Best Actress in a Musical.

She was awarded her initial Golden Globe for a pitch-perfect, wickedly funny portrayal of a woman obsessed with becoming a TV personality at all costs, in Gus Van Sant's To Die For, and has been nominated three additional times: for her performances in Jonathan Glazer's Birth, Anthony Minghella's Cold Mountain, and Robert Benton's Billy Bathgate.

In 2007, Kidman teamed with Jennifer Jason Leigh and Jack Black in writer/director Noah Baumbach's Margot at the Wedding, and with Daniel Craig in Chris Weitz's screen adaptation of the fantasy novel, The Golden Compass. She also voiced the role of "Norma Jean" in the Academy Award winning animated musical Happy Feet, reuniting her with the Australian director most responsible for launching her career, George Miller. She narrated the documentary release (Sundance Grand Jury Award and Audience Award-winner), God Grew Tired of Us, and also narrated the film biography of Simon Wiesenthal, I Have Never Forgotten You.

Kidman can currently be seen starring opposite Aaron Eckhart in Rabbit Hole, for which she has received Golden Globe, Screen Actors Guild and Independent Spirit Award nominations for Best Actress. From David Lindsay-Abaire's own screenplay adaptation of his Pulitzer Prize-winning play, Rabbit Hole was developed by Kidman's Blossom Films production company and is directed by John Cameron Mitchell. The cast includes Dianne Wiest, Tammy Blanchard, Sandra Oh, Giancarlo Esposito and Jon Tenney. She will also appear in the Sony comedy Just Go With It with Jennifer Anniston and Adam Sandler. Kidman recently completed filming Joel Schumacher's Trespass alongside Nicolas Cage and is next set to star with Clive Owen in Hemingway & Gellhorn for HBO.

Kidman made a highly-lauded London stage debut in the fall of 1998, starring with Iain Glenn in "The Blue Room," David Hare's modern adaptation of Schnitzler's "La Ronde," for director Sam Mendes and the Donmar Warehouse. For her performance Kidman won London's Evening Standard Award and was nominated in the Best Actress category for a Laurence Olivier Award. "The Blue Room" moved to Broadway for a sold-out, limited run from November of 1998 through March of 1999.

In January of 2006, Kidman was awarded Australia's highest honor, the Companion in the Order of Australia. She was also named, and continues to serve, as Goodwill Ambassador of the United Nations Development Fund for Women, UNIFEM, whose goals are to foster women's empowerment and gender equality, to raise awareness of the infringement on women's human rights around the world and to end violence against women. For the past nine years, Kidman has served as the UNIFEM Ambassador for Australia. Most recently, Kidman has lent her voice in support of the Women's Cancer Program at Stanford with Dr. Jonathan Berek. Along with her husband, Keith Urban, she helped to raised nearly half a million dollars for the Women's Cancer Program which is a world-renowned center for research into the causes, treatment, prevention, and eventual cure of women's cancer.

Screenwriter David Lindsay-Abaire's 'Rabbit Hole' retains what made it work on stage, chiefly a disarming sense of humor amid the grimmest sort of personal crisis, and a pair of juicy leading roles. The film, directed by John Cameron Mitchell, is conventionally made but extremely well acted.