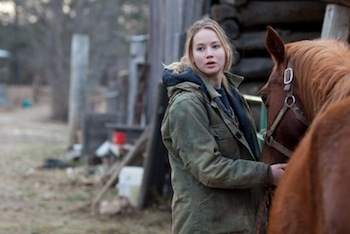 Jennifer was named one of the New York Times "50 People to Watch" in 2010 was most recently seen in Guillermo Arriaga's directorial debut THE BURNING PLAIN, opposite Charlize Theron and Kim Basinger.

The film premiered at the 65th Venice Film Festival where Jennifer won the 'Marcello Mastroianni Award for Best Young Actress or Actor.'

Jennifer Lawrence recently wrapped production on THE BEAVER, directed by and starring Jodie Foster, alongside Mel Gibson and Anton Yelchin. Other film credits include the lead role in Lori Petty's POKER HOUSE opposite Selma Blair and Bokeem Woodbine, for which she was awarded the prize of 'Outstanding Performance in the Narrative Competition' at the 2008 Los Angeles Film Festival.

She also starred in Jason Freeland's GARDEN PARTY opposite Vinessa Shaw as well as roles in DRILLBIT TAYLOR and WAVERLY HILLS.

On television, Jennifer was last seen in the third season of the TBS series The Bill Engvall Show. Her television credits include roles on Cold Case, Medium, Not Another High School Show and Monk.

Born and raised in Louisville, Kentucky, Jennifer began acting in film and television at the age of 14.

Adapted from Daniel Woodrell's novel, the movie "Winter's Bone" takes place in the Missouri Ozarks. Here, when someone's cooking skills are mentioned, the phrase refers to a methamphetamine lab, not dinner. The land and its socioeconomics are not for the weak. And in 17-year-old Ree, a flinty survivor portrayed by the spectacularly talented young actress Jennifer Lawrence