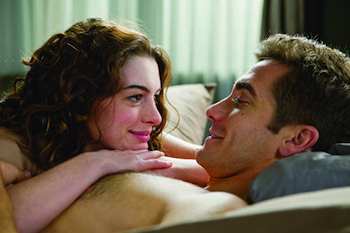 There are unsightlier hags in the world than Anne Hathaway and Jake Gyllenhaal, and the seriously mood-swinging romantic comedy "Love & Other Drugs" offers several acres of surface appeal simply because their characters, Maggie and Jamie, spend a heartening amount of time in bed, or near one, in various degrees of undress.

Unlike most rom-coms, the nudity's matter-of-fact here and, at its best, honest.

The sexual current between the shallow Lothario portrayed by Gyllenhaal (a Viagra salesman, and how) and Hathaway's coffeehouse waitress and part-time artist, who is also in stage one of Parkinson's disease, leads to both "movie sex" (slick, a little ridiculous) and something like the real thing, exploring the slippery territory between lust and love.

I wish director and co-writer Edward Zwick's film had the guts to treat "Love & Other Drugs" like a grown-up relationship story, rather than a relationship story periodically shoved aside by a lame and lamely raunchy romantic comedy for dummies.

Viagra jokes, even in a movie dealing with the cultural shake-up brought on by Viagra itself, tend to be ... stupid. At least, these are. They put the "obvious" in "obvious."

Set in 1996, Zwick's picture has a tiny bit in common with "The Social Network," in its depiction of the very recent past as a distinct historical period. The Gyllenhaal character's compulsive womanizing suits his career path as a high-flying late 20th century drug salesman; as even a lot of pharmaceutical reps will probably admit after a glass of wine, looks and nerve really are a big part of the job. Jamie's coarse, clueless brother (an aggravating turn from Josh Gad) is Jamie's opposite: All money -- he's a software millionaire -- and no social graces.

As for Maggie, well, she's almost a character.

More like a collection of cynical attitudes and defense mechanisms. As she and Jamie fall into each other's arms, she stays wary -- she knows what's coming for her, health-wise, and doesn't believe his expressions of commitment beyond what happens between the sheets.

Zwick and co-writer Marshall Herskovitz gave us "thirtysomething," and much of that series' creamy, glossy visual and thematic style persists here. If I bought it, I'd use a different word than "persist," but too much of "Love & Other Drugs" settles for facile point-making and prettiness. Hathaway saves as much of it as she can: She alone inhabits the credulity-stretching dual personalities of the picture with ease, often movingly.

Gyllenhaal, less convincingly: His speech rhythms and instincts seem a little dazed and sluggish for the farce-driven bits, and while his big, soulful eyes match up rather strikingly with Hathaway's, something in the character of Jamie, both as written and acted, remains opaque. He's meant to be a hollow man who learns how to fill himself up with the right stuff, but still. Maybe I'm in the minority; maybe Zwick's film will click with a big audience. I like it when it stays off-narrative, in bed and in tune with its hard-shell central lovers. The rest of it, the scenes with the brother, with the drug-rep wars ... strictly a placebo.