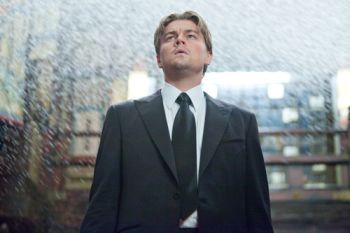 Sometimes the first adjective spoken in a movie speaks volumes. The first one you hear in the new thriller "Inception" is "delirious," describing the psychological state of a man, played by Leonardo DiCaprio, who has washed up (or awakened) on a beach and is brought into the home of a wealthy man he has known in other circumstances, somewhere in time.

"Delirious" describes the movie as well, which assuredly offers audiences sights heretofore unseen. Despite riffs on everything from "2001: A Space Odyssey" to "Blade Runner" to "Strange Days" to "The Matrix," the best of this elegant brain-bender -- a heist picture with a frame designed by Salvador Dali and M.C. Escher -- affirms the prodigious imagination and clout of writer-director Christopher Nolan, whose previous film, "The Dark Knight," made a billion, putting him into a position where such a dreamscape could be attempted.

Like any commercial enterprise exploring more than one level of reality, this one oscillates between willful disorientation and catch-up explanation. DiCaprio's character, Dom Cobb, works as an "extraction" expert, able to enter someone's subconscious and purloin valuable information for a fee. (He's the Carnac the Magnificent of corporate espionage, albeit working with more electronics and pharmaceuticals.) Ken Watanabe's impossibly rich industrialist hires Cobb not to extract but to implant an idea in the brain of a rival businessman (Cillian Murphy). If this idea to break up his family company succeeds, Watanabe's empire expands, and Cobb -- an international fugitive, sought by extradition authorities -- can go home to America and his beloved kids.

The plot, I suspect, will not matter much to people interested in diving into Nolan's rich, sleek series of collapsing surfaces. The entire narrative structure threatens to crumble at any moment, whether Cobb's "Rififi"-like associates, including the dream architect played by Ellen Page, are taking us somewhere visually wondrous or not. Marion Cotillard appears as Cobb's late wife, whom he has obsessively devoted an unhealthy amount of dreamtime to keeping "alive." (The entire cast is excellent, including Tom Hardy, Dileep Rao and, as Cobb's right-hand man, Joseph Gordon-Levitt.)

The story skitters among three "dream layers," which finds its most obvious parallel in the video gaming universe. Five minutes in the real world, we're told, equals one hour in one dream level, and 10 years down on dangerous Level 3. Some scenes carry amusing echoes of a script conference: At one point, Cobb and the gang kick around ideas for a persuasive emotional context in which to place the idea they've been hired to "incept." Nolan, often accused of being a "cold" storyteller, no doubt wrestled with the same challenge. (His solution: Make the protagonist, Cobb, a father dying to reunite with his family.)

In today's commodity culture, audiences have become utterly blase about surrealism; the most insane, physics-bending events are visualized in every other 30-second commercial or three-minute music video. Nolan, no dummy, knows this, and his response to pop surrealism's omnipresence is admirable: He doesn't attack us so much as enfold us into his images, while bending over backward (sometimes unsuccessfully) to restate the narrative rules of engagement. Some of the sights are spectacular, such as when Page and DiCaprio walk down a Paris street and the city folds over in half directly over their heads. The most rousing action sequence, a fight in a zero gravity hallway, cleverly lifts from "2001" (and "Royal Wedding," in which Fred Astaire danced on the walls and the ceiling).

Such dizzying high points compensate for lumpier bits of exposition. I wish the dream-action in the latter stages didn't strand us quite so long in the Canadian Rockies for James Bond-style shussing and shooting. (The movie, photographed by Nolan's frequent cinematographer Wally Pfister, was shot in Tokyo, Paris, London, Tangiers, Calgary and Hollywood on a blend of 35 mm and larger format 65 mm cameras.) And why was Hans "Bombast" Zimmer, allowed to score what seems like every second of this 21/2-hour fantasy?

Oh, well. "Inception" may not be the ultimate trip, nor even the first "Matrix." But Nolan's filmmaking intelligence places him among our most persuasive contemporary fantasists. His student feature, "Following" (1998) scrambled its chronology (as did Nolan's later, outlandishly clever "Memento") to keep us on our toes. I found myself wishing "Inception" were weirder, further out. But while Page's character is named Ariadne, the "mistress of the labyrinth" in Greek mythology, the film is Nolan's labyrinth all the way, and it's gratifying to experience a summer movie with large visual ambitions and with nothing more or less on its mind than (as Shakespeare said) a dream that hath no bottom.

MPAA rating: PG-13 (for sequences of violence and action throughout).

Credits: Written and directed by Christopher Nolan; produced by Nolan and Emma Thomas. A . Pictures release.