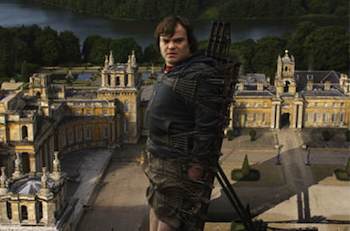 The cast of Gulliver's Travels is enjoyable, with Jack Black as Gulliver, Jason Segel as Horatio and Emily Blunt a witty cut above.

Agreeably slapdash, which is exactly what I thought of the widely derided (and ruder) Harold Ramis caveman comedy "Year Zero," the Jack Black-tailored cut of "Gulliver's Travels" bashes its way through a series of adventures in scale, ego and moderate amusement, existing primarily for set pieces such as Black's character, Lemuel Gulliver, leading the Lilliputians and their enemies, the Blefuscians, in a chorus of "War (What Is It Good For?)".

The cast is enjoyable, with Jason Segel (as Gulliver's lil' pal, Horatio) and Emily Blunt (the local princess) a witty cut above for this sort of thing.

Not much of the early 18th century Jonathan Swift original survives this round, shot in 3-D (oh, that old thing). A mailroom clerk thwarted by his own lack of ambition, Gulliver works in the guts of a great New York newspaper, where the travel editor (Amanda Peet) vexes him with her easygoing fabulousness. Improbably, and thanks to a dangerous round of travel-journalism plagiarism, he convinces her to send him on assignment to the Bermuda Triangle. There he runs into unusual weather patterns, survives a shipwreck and washes up on the shores of Lilliput, where he soon acquits himself as a savior-beast and enjoys the fruits of his newfound celebrity.

This new version of "Gulliver" takes a cue from Swift with its brief detour to the nearby island of Brobdingnag, where Gulliver is suddenly tiny and the people (we see only one, a petulant little girl who makes him play dollies and tea party) are immense.

Mainly, though, we have Black stomping around being the big cheese among the mouse-sized courtiers. Gulliver coaches Horatio on wooing the princess by various exotic means, including a rendition of the Prince song "Kiss."

Some of this is pretty funny, as when Gulliver has the Lilliputians reenact scenes from his life (actually, scenes from "Titanic" and the "Star Wars" saga) at a newly built and neatly tricked-out performance hall. Some of it isn't, as when Black squares off against a large robot version of his nemesis (Chris O'Dowd).

Fully half of "Gulliver's Travels" doesn't quite come off, yet the whole of it is earnestly silly and rather sweet. These are not the virtues of a blockbusting commercial comedy. My son, 10, didn't love it, but he liked it and that, friends, pretty much says it for me too.

About the Movie "Gulliver's Travels"

In this contemporary re-imagining of Jonathan Swift's classic tale "Gulliver's Travels", Lemuel Gulliver (Jack Black) is a struggling writer who works as a delivery person at the Times. To impress the travel editor, Gulliver ventures into uncharted waters and lands in a tiny civilization known as Lilliputians. Leading the Lilliputians to a victory over their neighboring nemesis, Gulliver comes to terms with his own shortcomings and emerges from his own little world.